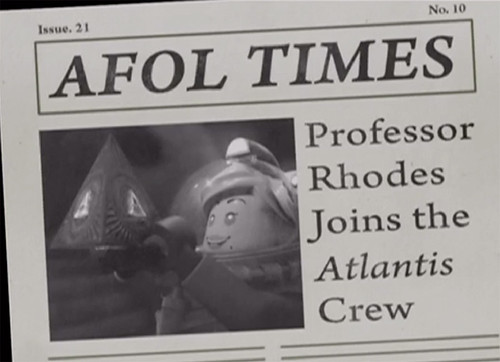 Notes:
* Lots of LEGO humor.
* The Neptune Carrier is enormous (as we mentioned yesterday). There is an elevator to get to the bridge (which is under the canopy of the Neptune Carrier).
* Lance introduces himself as an expert deep sea diver and an expert at “anything that goes boom”. He sounds like a jock and considers himself a ladies man. He can be careless and forgets to make crucial repairs.
* Dr. Fisher is sensitive and not too brave, but he is very clever and resourceful.
* Captain Speedman is gruff, confident, and does not like myths and legends, and “wild goose chases”. He and his crew salvage things and hope for the occasional treasure.
* Professor Samantha Artesia Rhodes is very assertive and very confident in herself and her ideas about Atlantis.
* The crew has been handpicked for the mission and are “the best of the best”
* No LEGO ads, although I guess the whole movie is one big advertisement.
* They call themselves “The Atlantis Crew” at the end.
* Dr. Artemius Rhodes was not mentioned at all. His submarine may have been shown, but Professor Samantha Rhodes says it was from the a sea station.

Lots of LEGO jokes:
* Hair falling off head.
* The briefing table was turned into a bed by First Mate Spears, who then rebuilds it back into a briefing table.
* The newspapers at the end of the movie are called:
*** Daily Connection
*** Brick Press
*** AFOL Times

It starts out with the Neptune passing 8,000 meters down and Captain Ace Speedman. Dr Fisher (Please call me “Fish”) (glasses) is building something out of LEGO pieces – an undocumented speces of fish dating back hundreds of years. He mentions to Professor Samantha Rhodes (Please call me “Professor”) that nobody has ever found one. Captain Speedman explains it’s a myth. 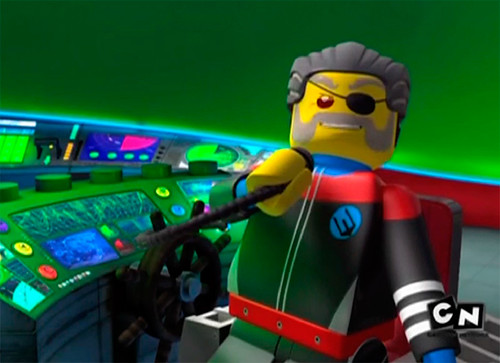 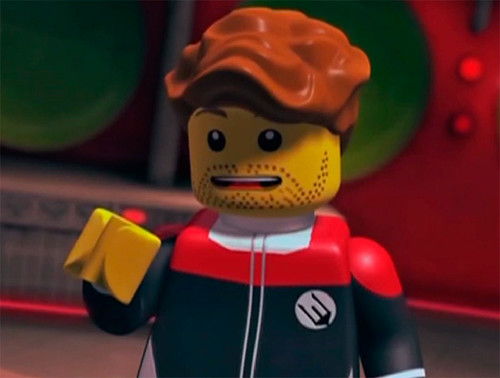 Note: Would love to see some minifigs in the above outfits.

Captain Speedman claims they’ve been on a 100 salvage missions. He has a discussion with Professor Rhodes.

Then we see First Mate Spears (Lance Spears) who is sleeping and has a nice head of hair (that falls off).

Later after some chit-chat and rebuilding of a piece of furniture, Professor Rhodes explains that there is a sea station on the ocean floor (possibly the 8077 Atlantis Exploration HQ, due out later this year). It was “built to recover ummm rare antiquities”. A few weeks ago there was a nearby underwater earthquake and the crew of the sea station barely escaped.

The station disappeared. Captain Speedman says they’ll find it, but Professor Rhodes explains that it won’t be easy, that the station was meant to explore a theory she has. She pulls a small projector out of her satchel and starts a presentation about an island in the pacific that contained a “great city” with “riches beyond our imagination”. 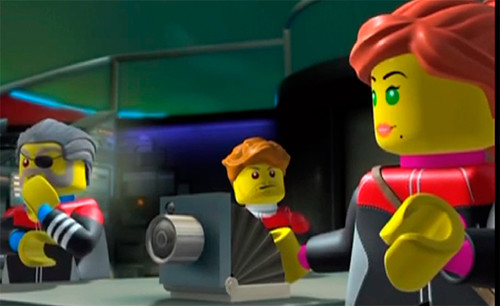 We then see drawings of LEGO minifigs dressed almost like ancient Greeks or Romans in what is obviously Atlantis: 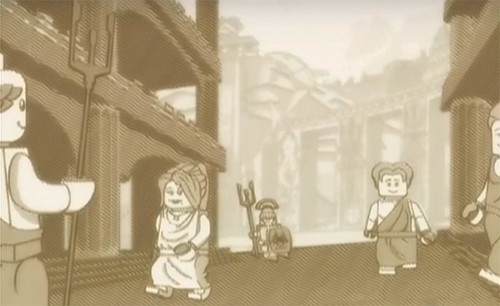 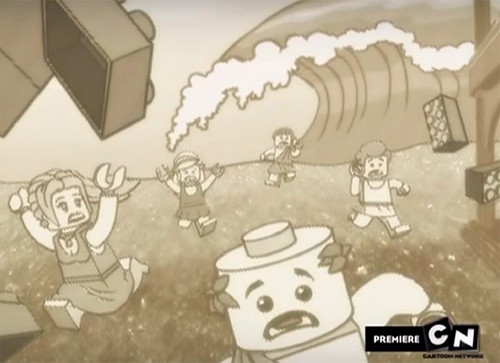 A volcano on the ocean floor led to a tital wave that caused the island to be swallowed up by the sea, “never to be seen again”. Dr. Fisher starts crying. Professor Rhodes pulls out the triangle that we’ve seen with the various symbols on it and calls it the map to Atlantis. It’s implied that Professor Rhodes tricked them into going on the mission. She is clearly agitated and explains that nobody believes her.

The proximity alert goes off. We then see a huge crab (from the 8056 Monster Crab Clash) and Professor Rhodes believes that it’s sensing the map to Atlantis. The crab flips the Neptune Carrier over on its back and then throws it onto the seabed. It then slides down a crevasse towards a huge hole. They fire a grappling hook to keep it from sliding down into a volcano. 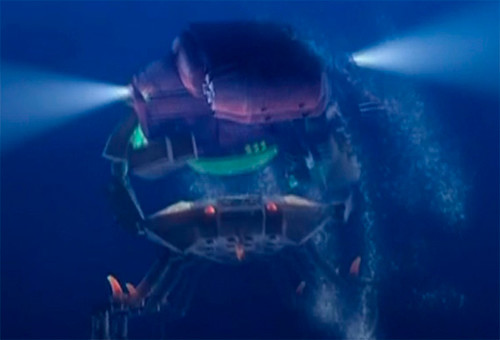 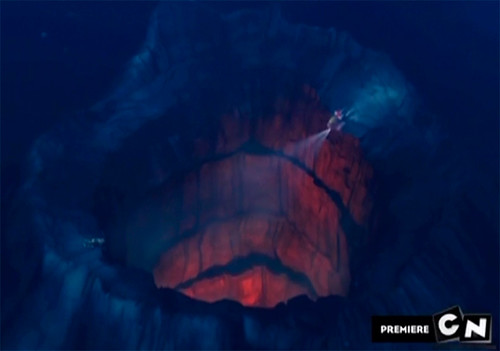 They find a wrecked sub from the sea station. It looks like this submarine from the teaser that popped up on Atlantis.LEGO.com at the end of last year: 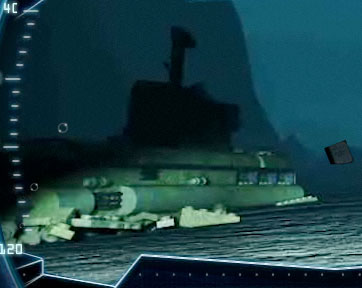 This is from the movie tonight: 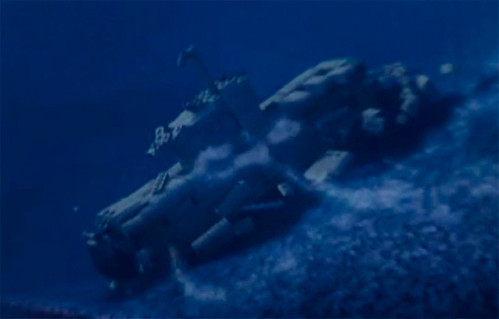 Note: So at this point we know that the wrecked submarine on the Atlantis.LEGO.com teaser site was not meant to represent Dr. Artimus Rhodes’ submarine, the Atlantis Finder.

The crab comes back, Captain Speedman gets on the 8072 Sea Jet saying “I’m going crabbing” and heads towards the wrecked submarine. He leaves Lance in charge, implying that Lance has earned his trust. He blows up the wrecked submarine and builds a crab trap out of the pieces. He also finds a gold/yellow crab ring/key in the wreckage and brings it back to the Neptune.

The cable to the grappling hook breaks (thanks to Lance forgetting to repair it) and they go sliding down the hole, which turns out to be a volcano. They bounce off of some molten lava (don’t ask) and into a long cave. They exit the cave into a large open area.

At this point they are 15,000 meters down. Dr. Fisher says it’s impossible, that nobody has been down that far and that the depth isn’t mapped out.

Professor Rhodes explains the Atlantis map and that it maps the depth they are at, and how there should be one crystal (the round ring/key that comes in most of the sets) for each side of the pyrmaid. The crab (yellow) crystal was the gate to another world, and the volcano is the gate.

Because the Neptune Carrier is so damaged, they go down to the vehicle bay (which is huge – it has large pieces hanging from the rafters). They begin building a 8060 Typhoon Turbo Sub for Professor Rhodes. and Dr Fisher gets in the 8059 Seabed Scavenger which is slightly rebuilt into the proper Seabed Scavenger – it was missing some pieces. Lance builds the Captain an 8057 Wreck Raider. 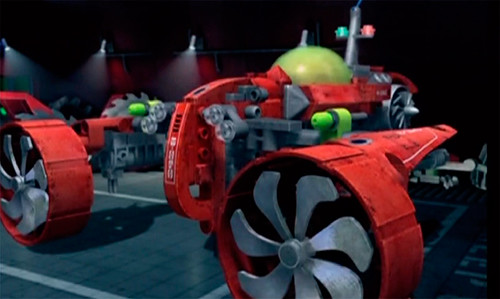 They stick some air tanks and lights on Lance, who is the best diver they claim.

The front of the Neptune Carrier opens up and they exit. 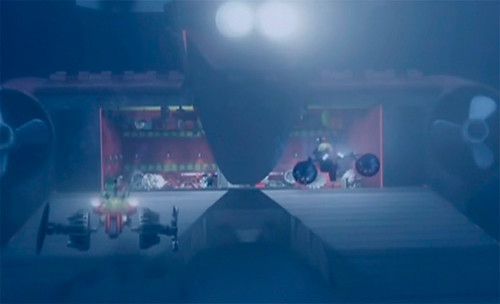 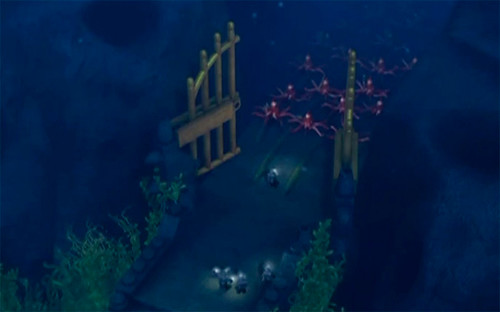 They get away from the Squid Warriors, who close the gate behind them. At this point you see the giant squid from the 8061. They manage to escape thanks to Lance and some quick thinking. They find another crystal (green – squid), and travel through the seabed full of kelp.

They come up on a lot of Manta Ray Warriors, who are aggressive towards them. Lance tries some martial arts and they take off. They take off because they are scared of the 8058 Guardian of the Deep. Lance builds a fake diver out of an extra suit filled with air. The Guardian eats it and starts to inflate and then farts (yes, he farts). They find a blue crystal (manta). The manta warriors grab the crystal.

At this point we discovery that nothing is wrong with Captain Speedman’s eye, he just thinks eyepatches are cool.

Captain Speedman goes after the crystal, and they end up at what’s been called the Shark Castle (see this post). It appears to be empty.

It is the setting from this image: 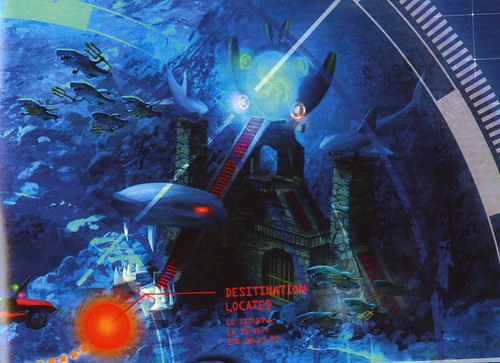 This is what it looks like in the movie:

They meet up at what appears to be a jail cell of some sorts. They get the blue crystal back. You see Shark Warriors (Shark Man as I prefer to call them). Something starts shaking and the Shark mouth entrance opens and dozens if not hundreds of shark warriors come flying out. They hide and send the sharks chasing after the subs. 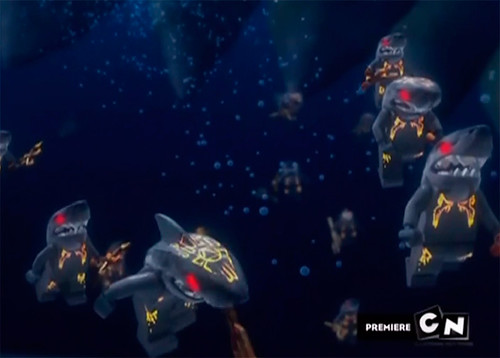 They find the final crystal (yellow/orange turtle). At this point, Professor Rhodes sets the pyramid/map on the top of what appears to be a throne of sorts and claims that Atlantis should be there, and that apparently it’s not. Captain Speedman tells her she’s part of the crew and he believes her and they’ll find Atlantis. Professor Rhodes realizes they are the key to Atlantis and place them in strategic locations around a structure.

They are missing one key, and then the Pyramid opens up to reveal a fifth crystal (key). It’s red. They place it on the throne/altar, things start shaking, and some large stone LEGO sharks break free (they were statues up until now). 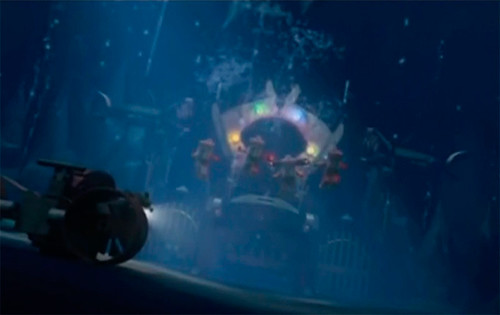 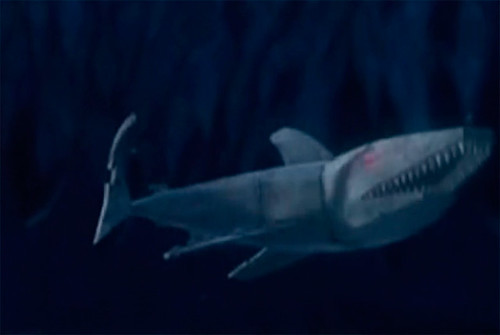 They keys activate some kind of portal (which you can see above). They go through the portal at the top (which is obviously the 8078 Portal Of Atlantis, due out this summer). They build a “rocket” (really just a Wreck Raider with some air tanks and 3 handles to help carry all four of them through the portal (and past the large stone sharks). 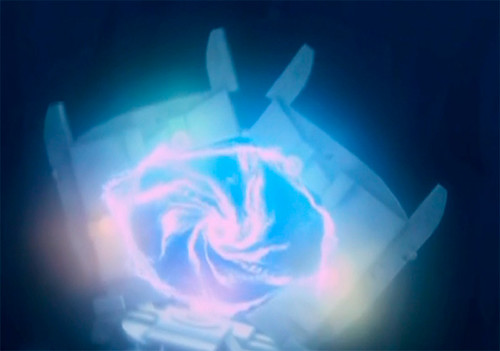 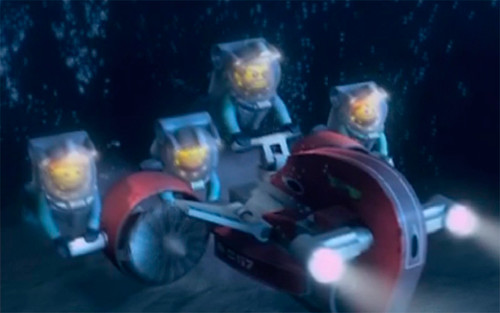 They end up in a large yellowish area (or glowing I should say), and they discover the lost city of Atlantis. 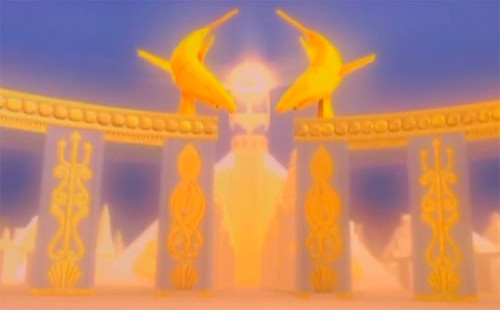 We see several shot of temples, pyramids, and other stone structures, all of it looking gold/yellowish. They announced it to the world. Dr. Fisher finds the fish that he was building at the beginning. They salvage the sub (presumably the Neptune Carrier) and Professor Rhodes joins the Atlantis Crew as they now call themselves. Unfortunately the credits were shrunk to make room for Cartoon Network advertisements so I can’t mention anything about the cast. 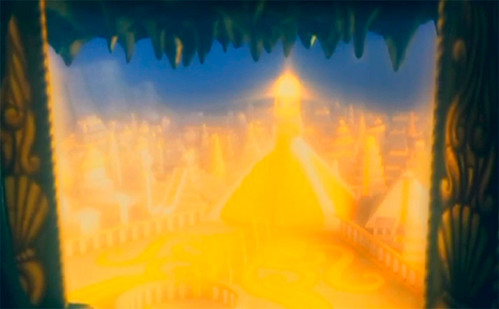 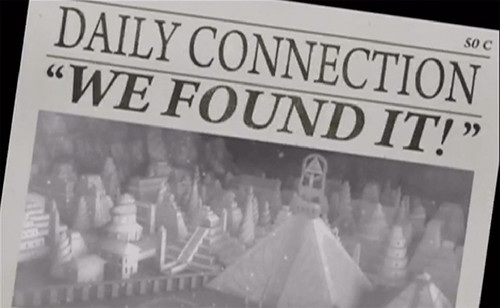 My speculation (hopes):
It would be a great way to introduce an actual Atlantis theme. When I mean an actual Atlantis theme, I mean a theme set in a combination of Ancient Rome and Ancient Greece, complete with stone buildings and minifigs dressed in togas and the like. That’s the feeling I get, that the movie was meant to show you Atlantis, and that there is more to it than what we’ve seen so far.

1 thought on “Review of LEGO Atlantis: The Movie”