Finally, our last review of the 2010 sets (for now). It’s been kind of crazy the amount of traffic we’ve drawn, and I’m glad we were lucky enough to be among the first to review the 2010 sets. Hopefully we’ve helped people make up their minds one way or the other about these sets, and if you have any questions or want us to take additional photos, please feel free to contact us.

For those of you who were big fans of of the heavily purple 4755-1 or 4695 Knight Bus (Brick link) from the Harry Potter line, your (space)ship has arrived, in the form of the Space Police 5982-1 Smash ‘n’ Grab. It’s an interesting theme – a purple and black spaceship that is shaped like an old pickup/tow truck whose purpose is apparently to steal ATM machines that hover around in space. The ATM machine is labeled “Asteroid Bank”. If you are curious, from what we can tell, the purple is consistent across the parts that have a glossy finish. The minifig Squidtron is a nice reference to Blacktron.

By the Numbers:
Set: 5982-1 Space Police Smash ‘n’ Grab
Type: Vehicle in the Space Police line
# of Pieces: 188
# of Extra pieces: 10 (see photo below)
# of Minifigs and what kind: 2, human with spacesuit, weapon, double-printed head, alien “Squidtron” with strange head.
Stickers? Yes, but kept to a minimum and most are not required.
Price: $19.99 USD at Official LEGO Shop, also at Amazon.com (price may vary) 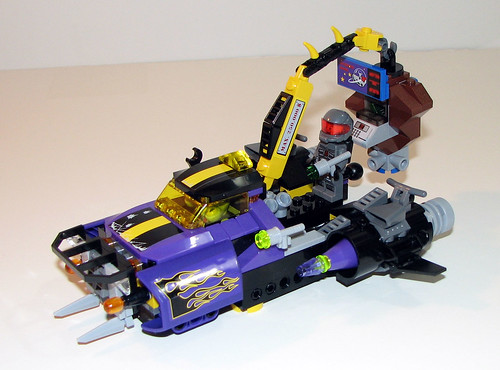 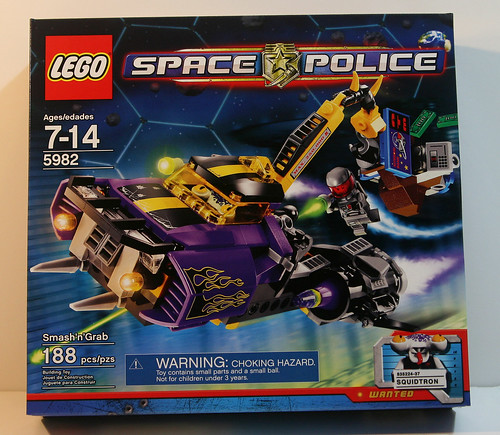 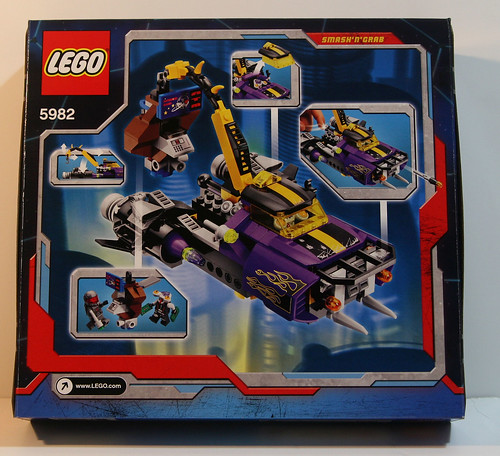 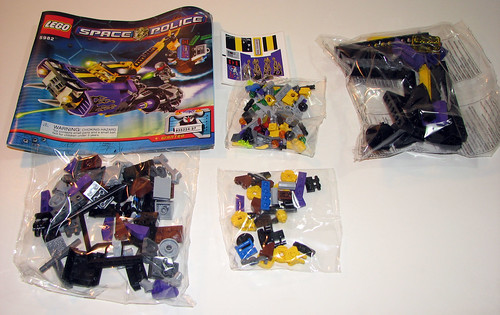 Ad in the back of the manual: 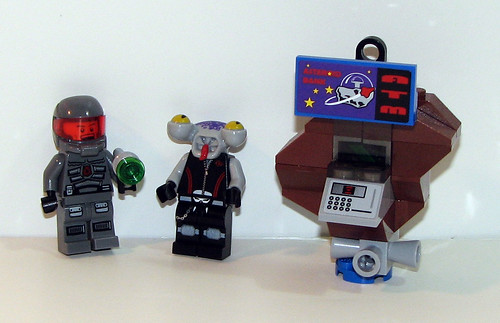 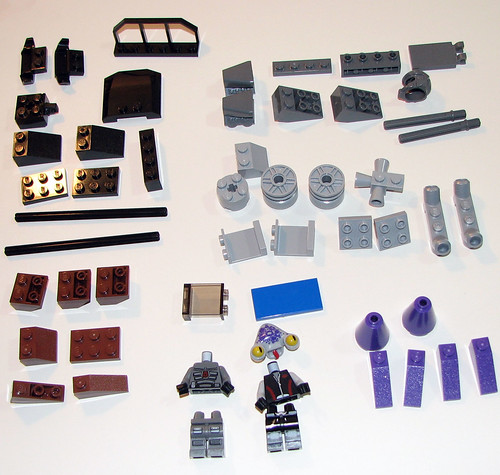 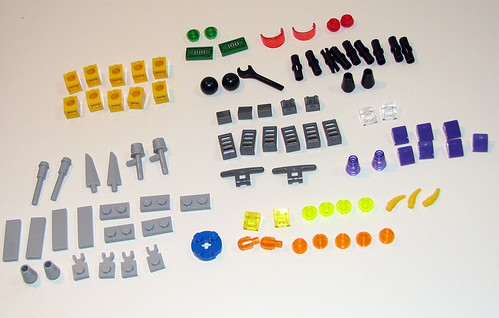 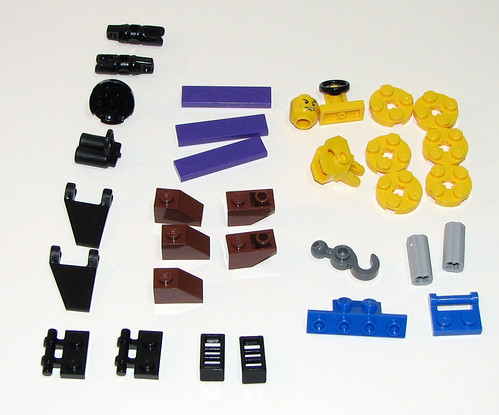 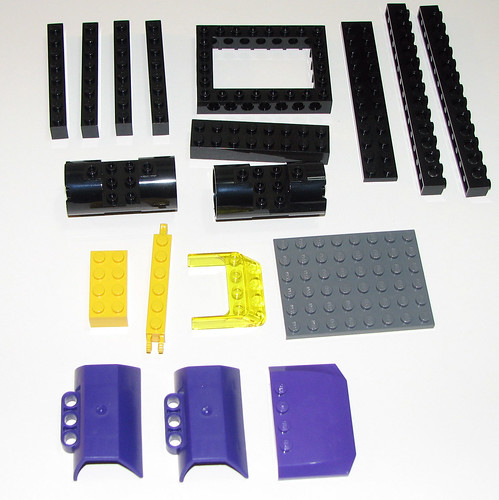 Some photos of the sub-assemblies and construction: 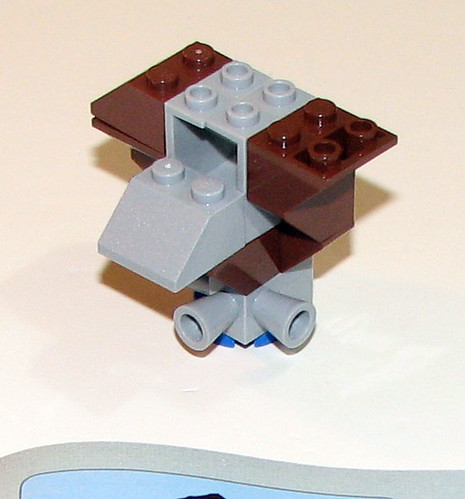 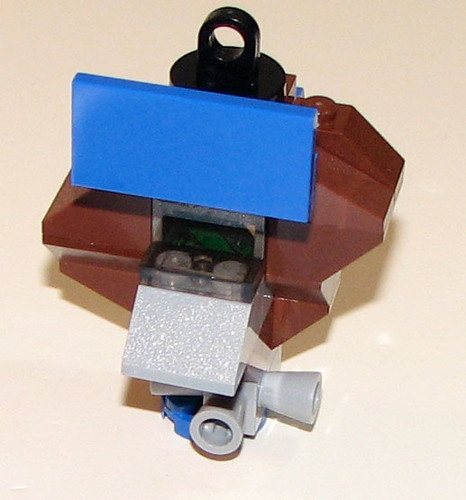 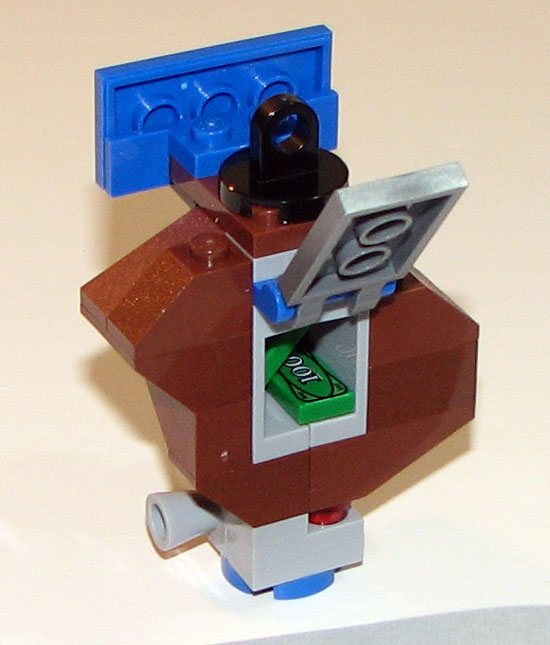 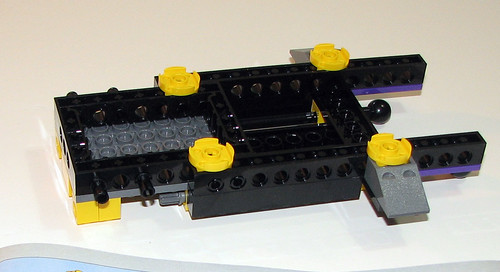 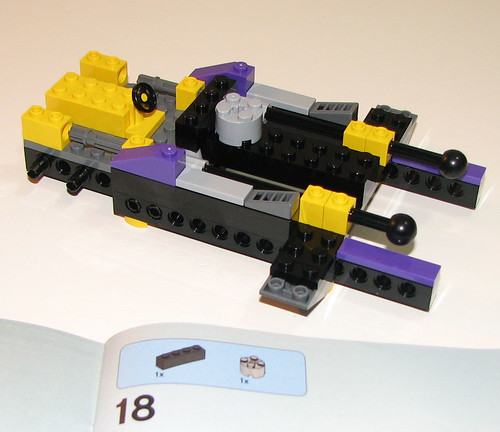 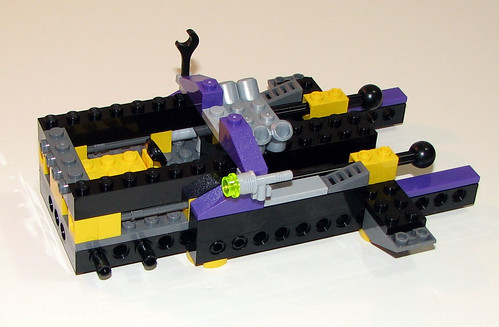 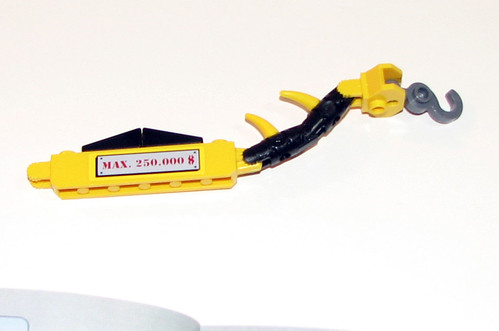 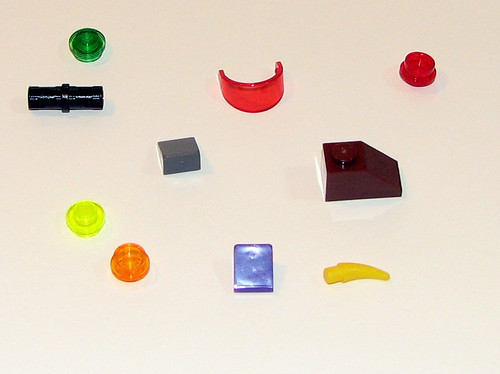 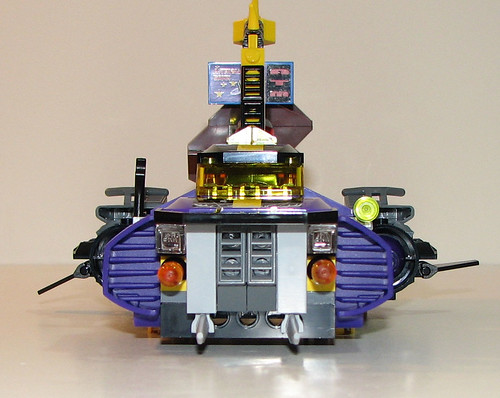 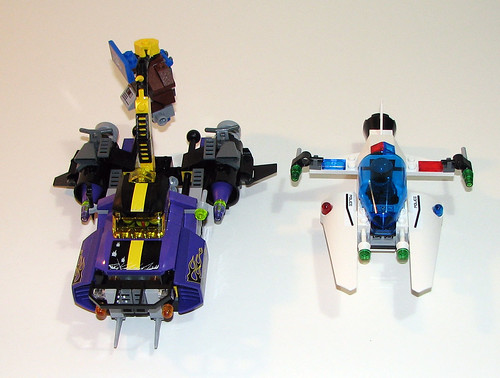 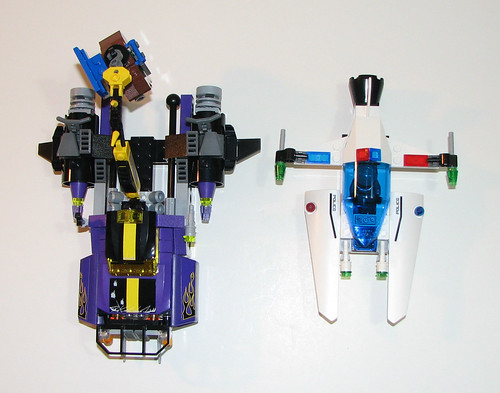 Thoughts – Pricing, Design, and Build:
I think it’s priced well – it’s a very good mix of parts and the minifigs are nice. The parts can be easily reused elsewhere for the most part, and if you are after purple parts, this set is a must-have. You can see from our 5982 gallery just which pieces are purple.

There are four areas I take issue with though:
1) The 2×2 purple cones (part # 4297454) in the engines have a tendency to fall off if brushed lightly. While this is a problem for other cones, these are exposed and in an area that would be ideal for somebody to grasp the vehicle.
2) The front grill is attached by two 1×1 orange transparent round plates (part # 4222960). Normally that wouldn’t be a problem except for one thing – the bulk of the front grill sub-assembly hangs below where they are attached, and there are two parts that jut forward from the bottom which means this thing is going to come off a lot if somebody is handling it (especially a child):

3) The missile system is awkward – it’s a flick-fire type of system using long pushrods that are threaded through the body. They are each with a couple of studs of surrounding pieces: 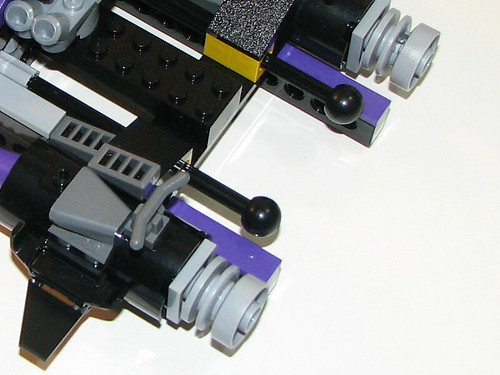 4) The worst thing to me is getting the alien minifig Squidtron out of his cab – you have to remove the cab roof and cockpit (part # 4570039 – similar to 6238a 4x4x1 windscreen). They are attached to the vehicle. If you were going to be using this for something and needed frequent access to the cockpit/cab, I would recommend putting it on a hinge.

Thoughts – Parts and/or stickers:
The stickers are well made and designed and they can be easily left off if needed, although I think you should at least apply them for the asteroid/ATM machine – it’s a pretty cool little sub-assembly that stands on its own, literally and figuratively, and it doesn’t take up many pieces. There’s only two stickers on the ATM anyways, and one of them turns a slope into a computer terminal which means it can easily be reused elsewhere. The back of the ATM machine has a door that closes tightly to keep in the money. It’s a mix of traditional/classic parts as well as Technic parts. I do think the parts can be reused extensively in your own MOCs, and if you’re after purple, this is going to be a set you want – there are obviously purple parts in here that you can’t get elsewhere. The non-purple parts are all fairly standard (including the Technic parts) and can be used in all manner of MOCs.

Thoughts – Minifigs:
The human in the spacesuit is obviously similar to the one in the 5981 review. Squidtron is a nice nod to Blacktron and he’s one of the more unique-looking aliens. His eyes are very widely spaced, barely wider than his body. Squidtron (and the human) are definitely minifigs to hold on to.

Thoughts – Swoosh factor, playbility and integration with other sets:
Swoosh – nope, not gonna happen. There is a very limited number of ways that you can hold this in your hand. Somebody is not going to be swooshing around with this thing, without knocking off pieces. If you lower the arm/crane and were to more securely fasten the front grill and maybe adjust the engines somehow so that the cones are either recessed more or relocated, then yes. Other than the problems I mentioned above, it’s a very cool looking spacecraft, and integrates well with the other Space Police aliens and sets.

Conclusion:
I think it’s got a lot of cool features, but there are some areas you would need to change if you were to do anything other than a static display. I think it could be a great starting point for modding – the way the back is laid out, you could remove the arm and perhaps lower the engines (or move them forward) and turn it into some kind of truck-inspired cargo hauler. The parts as a whole are great, and if you’re after purple parts and/or do a lot of space-themed MOCs, this is a must-have – the non-purple parts are easily usable in other MOCs as well. If you were to set this on your shelf, it would look great, with or without the decals. This is not a set where if you ultimately aren’t happy with the final vehicle, you aren’t going to be asking yourself how you are going to use the pieces, especially if you are into space themes. The biggest problems I had with the set can be corrected by somebody who has the parts to do so.