The Atlantis Neptune Carrier is by far my favorite set in LEGO’s newest series. This set has it all: four figures, a manta ray (which you build out of bricks), and three vehicles in one. This set is very reminiscent of the 7645 Mars Mission MT-61 Crystal Reaper set from a few years ago (Brickset link). Like the MT-61, the Neptune Carrier lives up to its carrier classification by housing a small exploration rover in its forward cargo area. A red ramp lowers out of the front; allowing the rover to roll out to embark on its search for Atlantean artifacts. The carrier’s second vehicle is located at the stern. This vehicle is a small, propeller-driven sea doo type which accommodates a single figure (as does the rover). 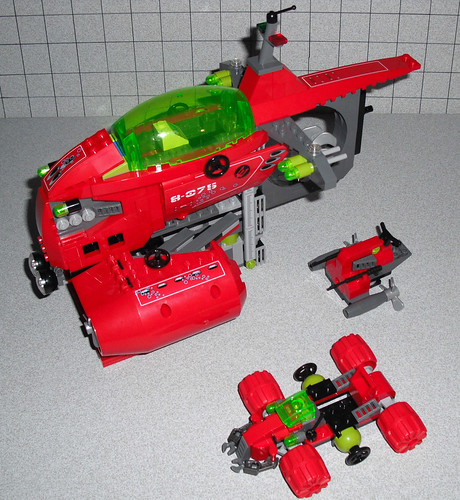 By the Numbers:
Set: LEGO 8075 Atlantis Neptune Carrier (from the Atlantis theme)
Type: Submarine with Mini vehicles
# of Pieces: 475
# of Minifigs and what kind: 1 Professor Diver (Dr Jeff Fisher), 1 Eyepatch Diver, 1 Regular Diver, and 1 Manta Warrior figure.
Stickers? Yes
Price: $59.99 at the official online LEGO Shop, Also at Amazon.com (price may vary) (other places charge up to $69.99, so be a smart shopper) 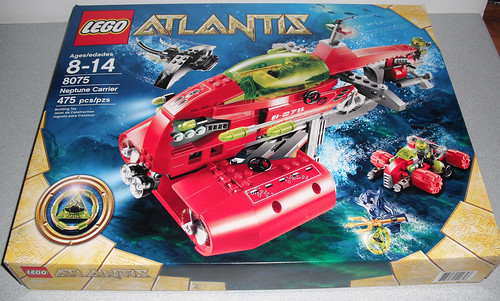 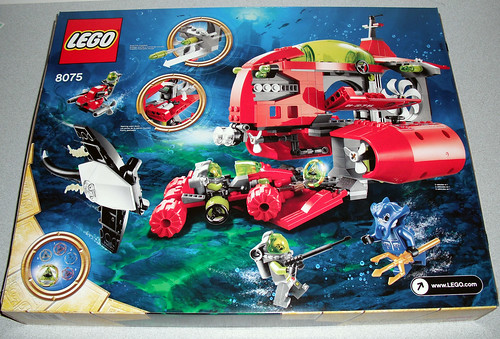 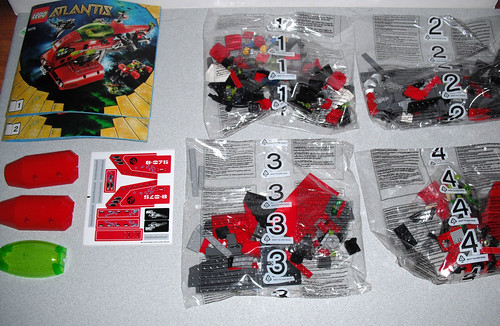 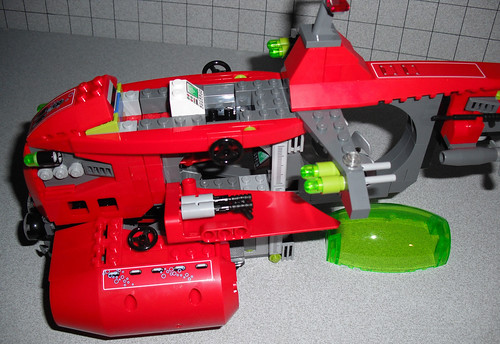 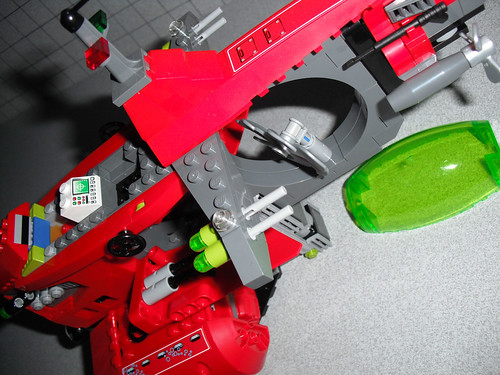 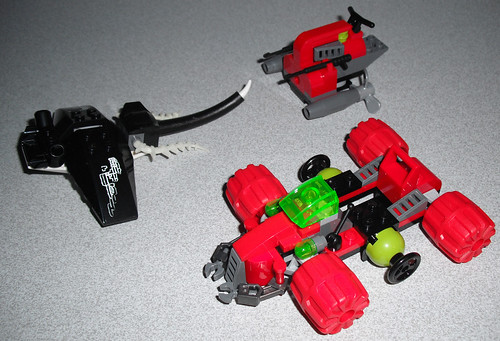 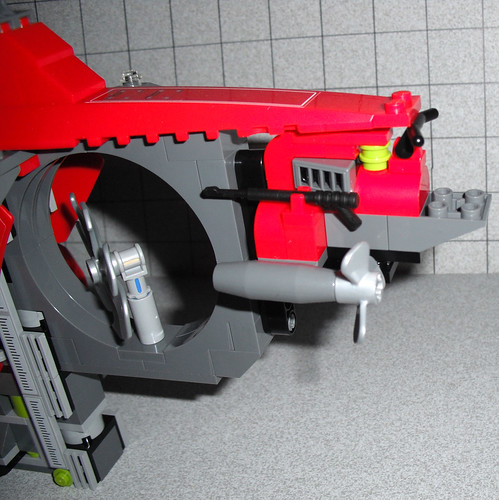 Thoughts – Parts, Design, Build, and/or stickers:
The red bricks are still very sharp in appearance as are the transparent green pieces. I like the red cowlings flanking the rover storage bay as well as the round flip-up lights mounted on the nose. the stickers require some plastic car and aircraft modeling skill. A child will probably need adult supervision, or just flat-out help putting them on straight. It will take a few tries to get them just right due to the curved nature of the parts. Armed with side mounted harpoon guns, the sea doo looks to be a formidable underwater machine on its own to fend off the manta ray that comes with the Neptune Carrier.

Thoughts – Minifigs:
The minifigs are your standard Atlantis diver figs except this set comes with an exclusive-to-this-set figure (so far) of the Professor/Biologist – Dr. Jeff Fisher. The attachable lights on one of the divers’ backpacks is a nice touch, and can easily be made from anyone’s spare parts bin to make more for other diver minifigs. The manta is technically the fifth figure included in this set. With its glow-in-the-dark tendrils and poseable tail, this LEGO creature is sure to wreak havoc against the two smaller vehicles. The included Manta Warrior can easily ride on the manta’s back as it tries to prevent the Neptune’s crew from discovering Atlantis’s secrets.

Thoughts – Swoosh factor, playability and integration with other sets:
This set will be an excellent addition to the Atlantis underwater headquarters set coming later this summer.

Conclusion:
The only problem I have with the set is that the Manta Warrior and the manta just don’t seem like much of a threat against the Neptune Carrier itself. Armed with 4 clear green tipped mini torpedoes, a weapons cache which can be revealed by opening the side mounted doors on the sub’s midsection (which also includes a couple of tools), and a minifig crew of three divers, I don’t understand why LEGO didn’t give the Manta Warrior a vehicle of some type to help stack the odds a little more in his favor (against a huge submarine!).

In the end, however, this set is still the coolest set from the Atlantis theme so far.