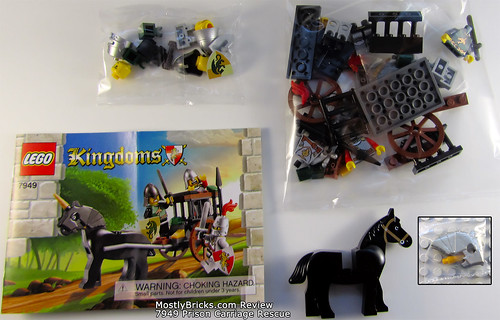 Some photos of the Assembly:

Thoughts – Pricing, Design, and Build:
The design is clever given that the designer(s) only had a very small number of parts to work with and a very specific theme and price point. A rough guess would be that they had to be right around 25 parts for the cart when you take into account the mini-figs and unicorn. There isn’t really anything that feels lacking, although I wonder about the open space at the front of the cart – could there have been another piece placed there instead to keep the prisoner from escaping? The ladder at the back that functions as a gate/steps is also a nice touch. The overall design is in keeping with the green/brown/gray color scheme.

As for the price – definitely worth it. Being that it’s non-licensed (unlike Toy Story, Star Wars, etc.), LEGO is able to keep the price per part down to very reasonable levels. You’re getting three minifigs and a horse/unicorn and a vehicle – no complaints from me. It’s as much of a good value as the 7955 Wizard.

Thoughts – Parts:
It’s a very clever use of parts – all are standard as far as I can tell. I haven’t poked through Peeron, etc., to check for rarity or variations or colors, but these all appear to be based on previous parts that were available through other kits (especially Castle sets) or individually through Pick-a-Brick. There are only two extra parts (a couple of “cheese wedges”). All of the parts could easily be used in your own MOCs (Castle-themed, Kingdoms-themed, or your own imagination). It’s a $9.99 set though, so you probably won’t see any specific parts on a non-licensed set at this price point.

Thoughts – Minifigs:
The minifigs, and I am partially including the horse/unicorn, are what make the set. One of them (the prisoner/soldier) has a double-printed head. He has both a scared look and a smug “I’m getting out of prison” look. The other two minifigs only have one expression, but their faces are largely obscured by their helmets anyways. Speaking of helmets, the helmets are nicely designed – hopefully I’ve done a little bit of justice towards them with some of the photos above. You get a spear (attached to the cart/carriage), a couple of swords, two shields, and three helmets. All details are very nicely printed on the minifigs and the shields are very sharply detailed with their respective factions and very recognizable.

Thoughts – Swoosh factor, playability and integration with other sets:
It’s definitely got the swoosh factor, and works well with the other Kingdoms sets. Personally, I’m considering picking up another and building a larger cart as well as to have the extra minifigs. If you are buying for a child, they should enjoy it – plenty of ideas come to mind and it’s not a limiting set. It works well, even with some of the other sets that are under $20 in the Kingdoms line/universe.

Conclusion:
The value is great in this set. As I mentioned, for $9.99 you are getting three minifigs (and not just plain minifigs) with plenty of gear, plus a horse that doubles as a unicorn plus 25 or so extra parts that make up the cart. This is probably one of the best values you’ll see this year from LEGO. If you are looking to build an army of minifigs for the Kingdoms line, this would be recommended. You could build up a nice little medieval-themed LEGO collection with this set and some of the other cheaper Kingdoms sets for a very decent price.