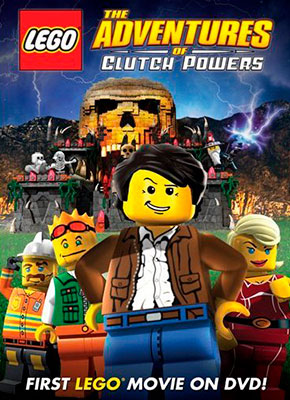 LEGO’s first movie on DVD, the Adventures of Clutch Powers, should be available today (February 23, 2010), at least in the US.

Amazon.com is currently listing it for $14.99 (normally $19.98) with a release date of today. This is for the widescreen version in English, with English, French, and Spanish subtitles. It’s 82 minutes long. Best Buy is also showing it with a release date of today but there’s no way to check if it’s available in the physical Best Buy stores yet – it’s only listed for pre-order on their website.

Before anybody says “what about the Bionicle movies?” LEGO is apparently not counting those, and rightfully so. It’s also not counting LEGO Atlantis: The Movie since that has not made an appearance on DVD (unfortunately).

Obviously it’s going to be used to help sell LEGO products and sets, however a lot of effort has been put into it, and it’s looking more and more like it will be a way to introduce newcomers and possibly even AFOLs to either existing sets or upcoming sets, such as Kingdoms (the replacement for Castle), Power Miners, Space Police, etc. I think it’s going to be as cool as the Atlantis movie.

Don’t expect any of the licensed themes like Harry Potter or Star Wars to make an appearance – from the trailer and from people I’ve talked to, this is all in-house themes/lines from LEGO.

This is LEGO and Universal Home Entertainment’s summary of the action:

For the first time ever, see the creative world of LEGO® come to life in the all-new feature-length DVD movie. Meet Clutch Powers, the best builder and explorer in the LEGO®universe as he heads off on his most dangerous mission yet. Join Clutch and his team of LEGO®experts as their adventure leads them from LEGO® City to the Space Police prison planet to the medieval world of Ashlar where they must help the rightful heir to the King’s throne find the courage to regain the kingdom from the evil wizard Mallock the Malign. Their brick-building skills will be put to the ultimate test as they face off against Mallock’s skeleton army. Get ready for an action-packed adventure like nothing you have ever seen before, The Adventures of Clutch Powers!

When it shows up, I’ll be doing a review.