This review is for the 8057 Atlantis Wreck Raider which is, of course, set in the LEGO Atlantis theme. It’s kind of an in-between vehicle set in the Atlantis theme – it’s well above the impulse price and part count, but at $9.99 it’s two-thirds the cost of the 8059 Seabed Scavenger. It’s a very efficient use of parts, fits well in the theme, and thanks to the human diver and Shark Warrior, it’s a good value. 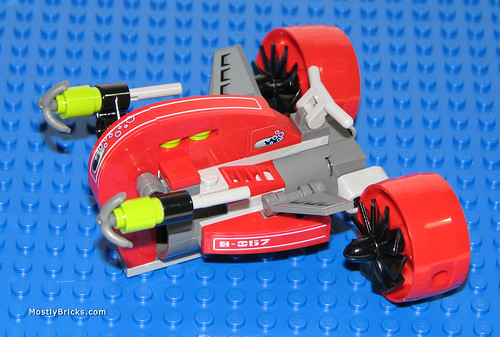 Given the low price, and that I liked the selection of parts, and kind of as a challenge to myself, I picked up another 8057 and decided to see what I could create with just two of them. I will be posting that tomorrow (Friday, January 15, 2009). It was an exercise in frustration, but still interesting.

Update: Wreck Raider Quad – a MOC made up of two 8057 sets plus a small number of other pieces.

By the Numbers:
Set: LEGO 8057 Atlantis Wreck Raider
Year of Release: 2010 (technically available at end of 2009)
Type: Mini Vehicle from the Atlantis theme
# of Pieces: 64
# of Extra pieces: 2
# of Minifigs and what kind: 2 – Human diver (Captain Ace Speedman), Shark Man
Stickers? 8
Ages: 6-12
Time to Complete: Less than half an hour (I spent more time taking and editing photos and writing this review than it took to put together!)
MSRP/Price: $9.99 US from LEGO Shop at Home , also available at Amazon.com, Target, Wal-Mart, TRU, etc. (price may vary from MSRP elsewhere) 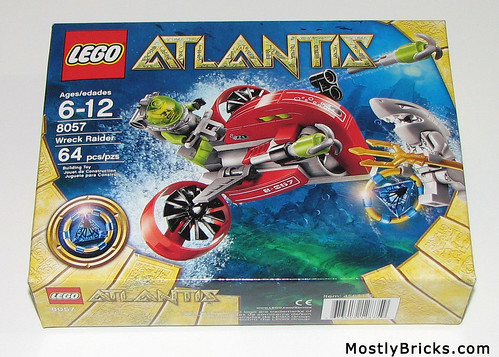 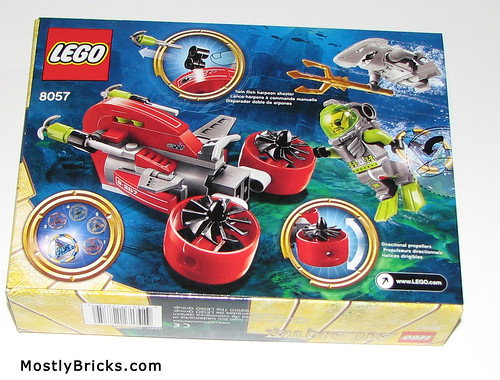 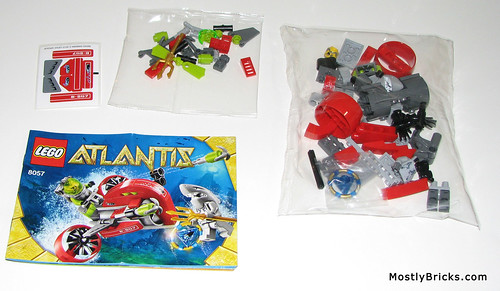 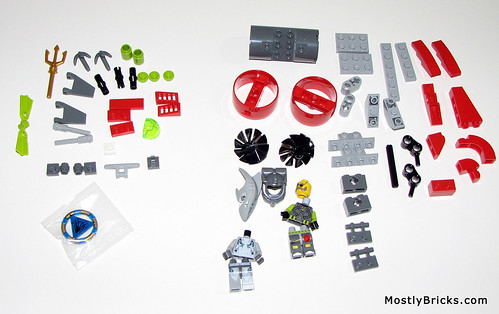 The Minifigs/Minifigures (more at bottom of photos): 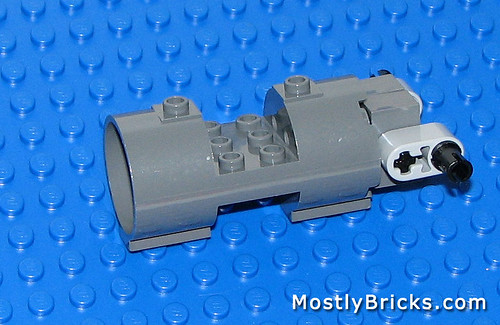 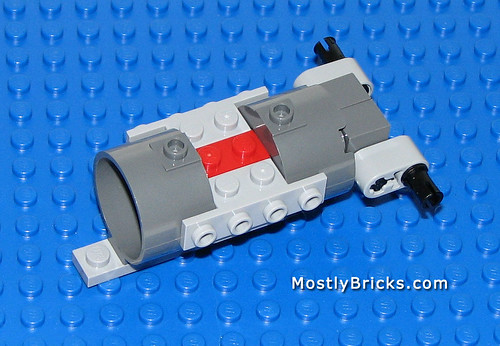 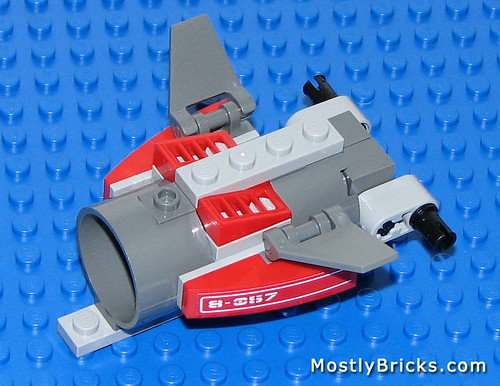 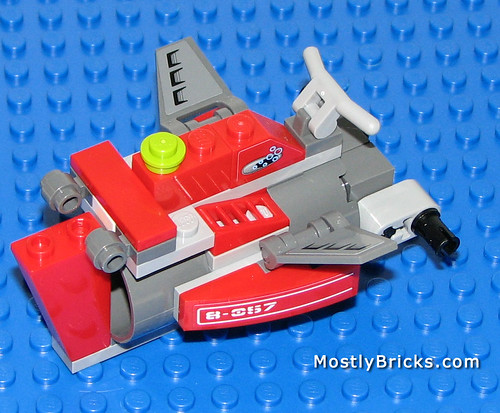 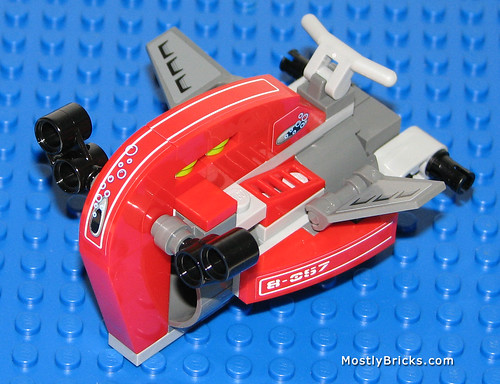 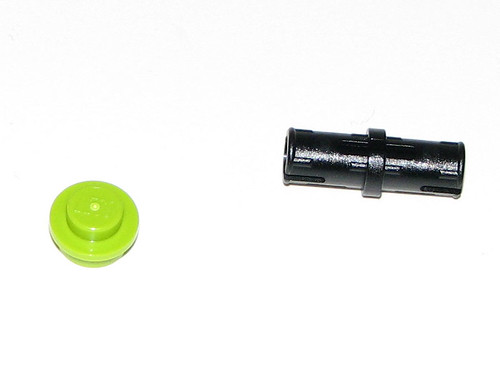 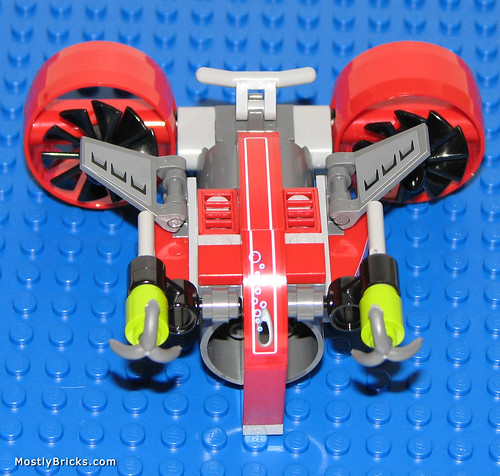 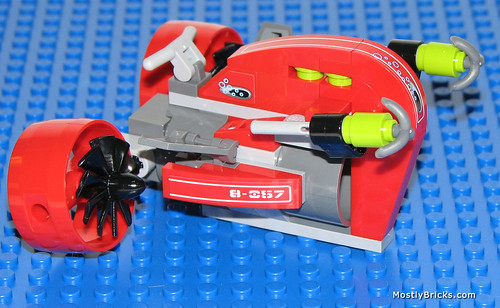 The extra shark man/shark warrior is from 8060 Typhoon Turbo Sub: 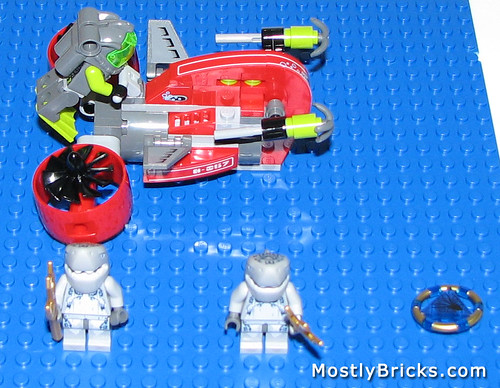 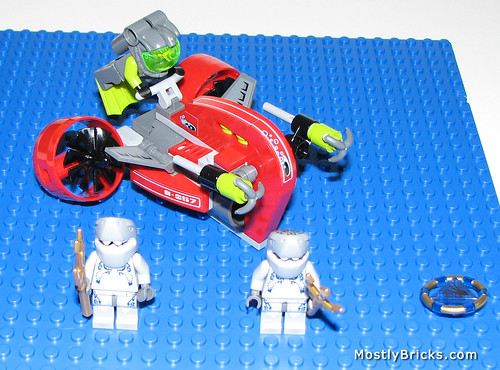 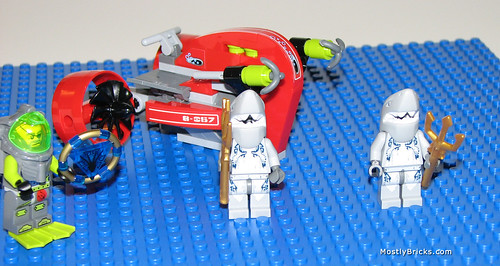 Thoughts – Pricing, Design, and Build:
At $9.99 USD, I think it’s a good deal given the two minifigs and the selection and uniqueness of parts. It’s the cheapest way to acquire a Shark Warrior at this point (as well as Ace Speedman). The design is pretty good given the low part count, and I felt it was a very efficient and unique use of parts. It is a physically solid design – you aren’t going to knock anything off accidentally brushing it.

Thoughts – Parts and/or stickers:
You get a Squid Key – don’t ask me why, since a Shark Warrior/Shark Man is the minifig – ask LEGO, you can even see it on the box art, so this wasn’t a mistake. There are stickers, and they aren’t too bad, but it can be tricky lining them up on the two pieces that fit together. I put my stickers on one of my sets since I plan on having one around for some kind of vignette at some point. I’m not a fan of stickers as I’ve said many times, but I fully understand and agree with the reasoning and don’t have a problem with these – you can build the set without them, but they look fine either way, and are a nice touch if you are going to keep it around as LEGO designed it.

As for the parts – the two props/motors are a valuable addition to anybody’s parts inventory and you can never have enough red if you are planning on working with Atlantis MOCs. There are a few Technic parts, but not too many and they aren’t as noticeable as say the Typhoon Turbo Sub. If you are planning on buying one for MOCs/spare parts like I did, be forewarned. While there are some good parts and the minifigs are good, there’s not a lot of any particular part, given the overall low part count of the set. This is why LEGO was able to keep the cost down. I picked up another 8057 as MOCfodder, but if you are looking for just a couple of parts, hit up BrickLink. Update – see the link at the top of the page for my MOC

Thoughts – Minifigs:
It’s always good to get another Shark man (Shark Warrior). As for the human, you get a double-printed head of Captain Ace Speedman, which is the same diver available from the 8075 Neptune Carrier. That’s not necessarily a bad thing – not everybody is going to splurge for the 8075. The Shark Warrior is the same as from the 8060 Typhoon Turbo Sub (see above photo), and this is about as cheap as you are going to be able to get him for now, unless LEGO releases an impulse set.

Thoughts – Swoosh factor, playability and integration with other sets:
Definitely swooshability and playability – this would be a good set for a kid in this line – it’s easy to put back together should an “accident” happen or the Shark or Squid Warriors manage to disable it 😉 It does fit well with the other Atlantis sets.

Conclusion:
It’s a good little set, well worth the $9.99 if you are into the Atlantis line. As I mentioned a couple of times, it’s the cheapest way (for now) that you will be able to get a Shark Man/Shark Warrior minifig (short of hitting up BL). For such a low part count, TLG was able to put out a nice little one-person vehicle that is quite a bit larger than the 8072 Sea Jet which is about one-third the cost and parts count. If it didn’t have a second minifig (regardless of whether it’s a Shark Warrior or Squid Warrior), I would question the value, but thankfully LEGO included one. It’s a solid build as well.