This is another excellent entry in this already promising new series, and would go great with any of the older Aqua Raiders sets or Atlantis theme that have come before. This set is currently available contrary to what other AFOLs have told me online. IT IS OUT!! Tell your wife, your mom, or your girlfriend to go get it for you now if you can still find it.

Set: LEGO Atlantis 8059 Seabed Scavenger
Type: Vehicle in the Atlantis theme
# of Pieces: 119
# of Minifigs and what kind: 1 X Diver (with facial stubble and reversible head) and 1 X Manta Warrior
Stickers? One sheet of 3 decals
Price: $14.99 at the official online LEGO Shop , also at Amazon.com (price may vary) 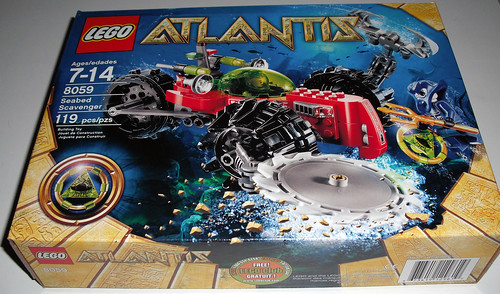 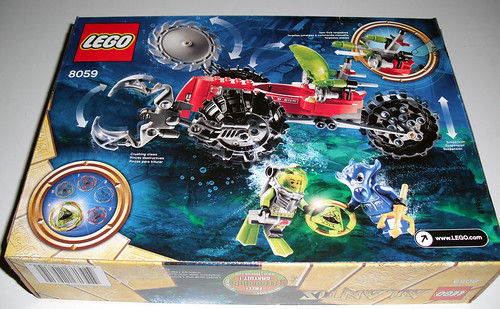 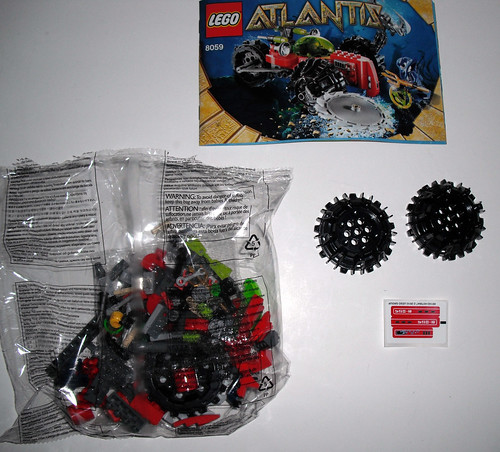 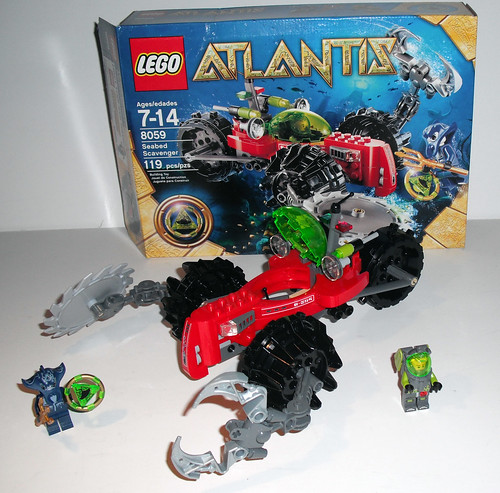 Thoughts – Pricing, Design, and Build:
The price was pretty fair for the quantity and variety of pieces. The coolest design aspect to the completed model is that it looks like a lobster. I was pretty impressed with the fact that LEGO kept the overall design familiar. Upon looking at the Seabed Scavenger, there’s no mistaking what it’s supposed to look like. It also reminds me of a farm tractor with its bull nose, red color, and positioning of the headlights. The Scavenger is armed with a spinning sawblade (a la Power Miners), and a claw; both ball jointed for easy swiveling. The build of the body is very solid, and the bouncy suspension made me believe that this thing could actually traverse the perilous atmosphere and rocky terrain of some shipwreck laden abyss without incident.

Thoughts – Parts and/or stickers:
The parts are a good variety. I like the red bricks a lot, and having a little gray thrown in means that I can buy another one of these to use as parts for building something else.

Thoughts – Minifigs:
The diver minifig is what it is: a diver minifig. There’s not too much else to say except that I discovered that (after having 3 of these figs already), the flippers can be attached/stored on the figure’s airtanks/backpack. This makes it easy to prevent kids from losing the flippers (there is no place to store them). The diver doesn’t come with a harpoon gun, though. The Manta Warrior figure is my first since I began collecting this series. He comes with a gold trident as though that’s really going to do damage up a against a hulking, underwater rover armed with a sawblade and a claw! Good luck, little manta man.

Thoughts – Swoosh factor, playability and integration with other sets:
First off, I didn’t really care for the flick missiles. The missiles in this set are really nice looking with their clear green tips, and Power Miner green midsections; but they’re just not my thing. If I was a kid and still playing with LEGO, then I probably wouldn’t care for the flick missiles; that’s just my opinion. The coolness factor is high. I really like the slight Power Miners feel to the vehicle with its headlights, big wheels, sawblade, and realistic look. For the completists out there, this set comes with Atlantis Ring #4 (Manta Ray) from the set of five. It’s green and gold, and looks great when backlit. On a side note, I like the clear green bubble canopy.