Here’s the review – better late than never. I never bought the original release of the LEGO Landspeeder years ago, but I can say (based on the pics of the old one) that this Landspeeder is sleeker, and doesn’t look like a huge brick with jet engines (like the old version). The build itself is solid. There’s not one issue I had with the completed model such as jiggly engine pods, or easily knocked off parts. I also find it pretty cool that all the pieces are existing LEGO parts, so if you want to hunt down all the parts to build another one, you would be able to make a landspeeder in any color you want.

Note: One of the engines is deliberately without a cowling – check the box art. 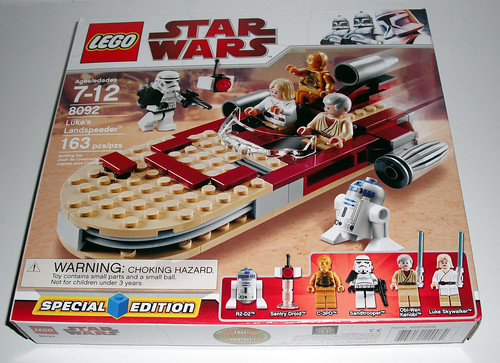 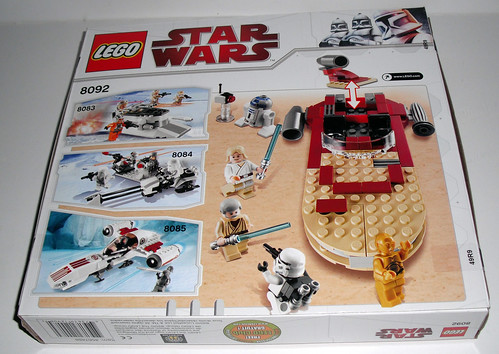 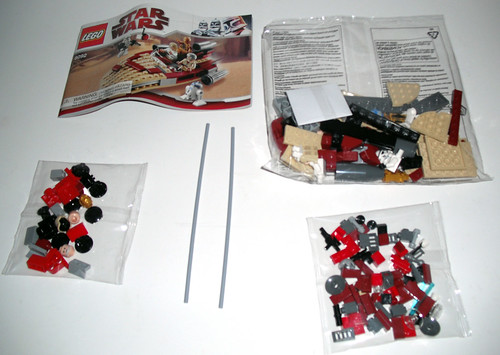 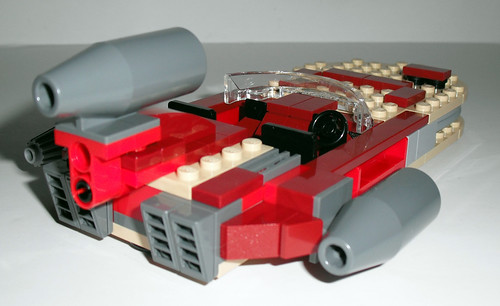 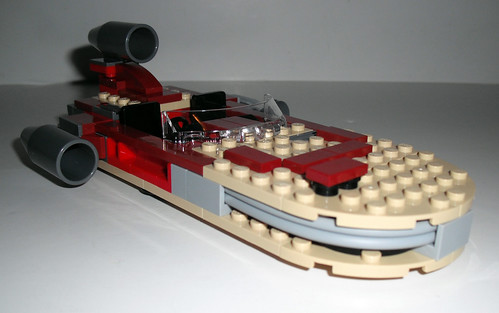 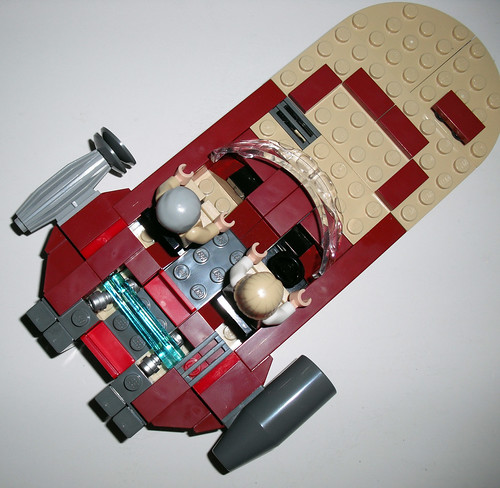 Thoughts – Pricing, Design, and Build:
Pricing is pretty much what you’d expect a set with this piece count to cost. While it’s still a little more than say a non-licensed LEGO brand, it’s not way overpriced like some of the other new LEGO Star Wars sets.

Thoughts – Parts and/or stickers:
I particularly like the windshield piece, and the fact that there are no stickers in this set just made the building process much quicker; but slightly less challenging for me. The front grille is also interesting to note, because it’s not made up of ribbed LEGO bricks or stickers; it’s actually constructed of two plastic bands that bend into position to form the grille. Another nice feature is the hidden compartment under the center engine where you can store Ben and Luke’s lightsabers.

Thoughts – Minifigs:
If you want a batch of good Star Wars minifigs, then this set is a good start. You get a Tatooine Luke Skywalker with a new hairpiece, one old school Ben Kenobi, a nice version of R2-D2 and C-3PO, a Sandtrooper with a back pack and cloth shoulder guard, and a “floating” surveillance droid like the one that followed the Sandtroopers around in the Special Edition version of Episode IV. Luke and Ben each have blue lightsabers, and the Sandtrooper comes with a blaster and a can of LEGO whoopass.

Thoughts – Swoosh factor, playability and integration with other sets:
This set would be really usable to kids if they actually had a Tatooine playset to use it with. The LEGO Cantina set has gone the way of the dodo, so I don’t see any reason as to why LEGO decided to make this vehicle out of all the things they could have made. A fair amount of Hoth vehicles and static sets have been in production for the past number of years (New Hoth trooper packs are now available – see the 8084 Snowtrooper Battle Pack Review), so why not Tatooine ones? Regardless, this set will appeal to people like me who grew up on the original trilogy, and have fond memories of Luke’s Landspeeder. I think that LEGO just wanted to follow George Lucas’ example of redoing things a little “better”, and chose the Landspeeder as the guinea pig. Then again, if something Star Wars has been redone in a better way, then Lucas probably has nothing to do with it. In other words, this Landspeeder redux does the movie version justice. I have come to regard this new LEGO Landspeeder (compared to their old one) as the J.J. Abrahm’s version.