This is a brief, but image-heavy review of LEGO Space Police # 5981 Raid VPR from 2010. It’s a fairly simple and elegant set – only 69 pieces, and 6 of those are extra. It really is reminiscent of some of the older space sets, not just Space Police 2, and would probably be right at home at Neo Classic Space. This set and 5982 Smash ‘n’ Grab, are actually the first two Space Police 3 sets I own, and I like the Raid VPR a lot. I think it has potential to inspire quite a few MOCs, especially since we are seeing a lot of people trying simpler vehicles.

On a side note, Toys R Us refers to this as a “Space Police Interceptor” and you’ll notice the white balance is off on a lot of the photos – that’s what happens when you are photographing a white vehicle against a white background.

By the Numbers:
Set: LEGO Space Police 5981-1
Type: Vehicle in the Space Police Line
# of Pieces: 69
# of Extra pieces: 6 (see photo below)
# of Minifigs and what kind: 2 – A human with a space suit (and a double-printed head), and “Rench” an alien with a rocket launcher
Stickers? Yes, 5, very minimal.
Price: $9.99 at the Official LEGO Online Shop, also available at Amazon.com (price may vary). 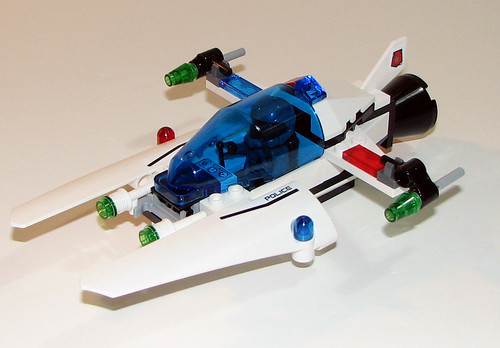 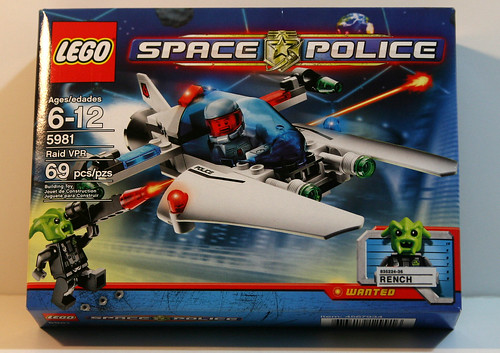 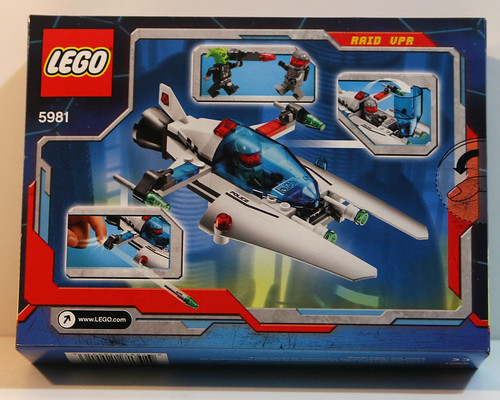 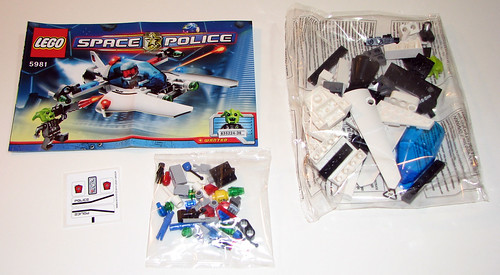 The Minifigs: (Note: there’s only two, I just wanted to show multiple angles) 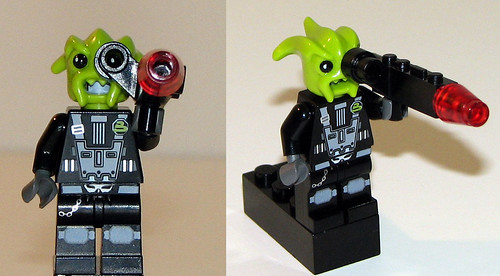 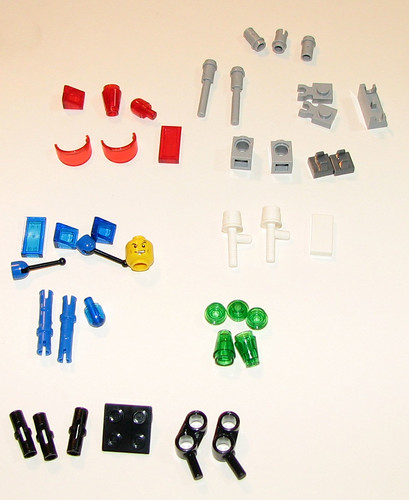 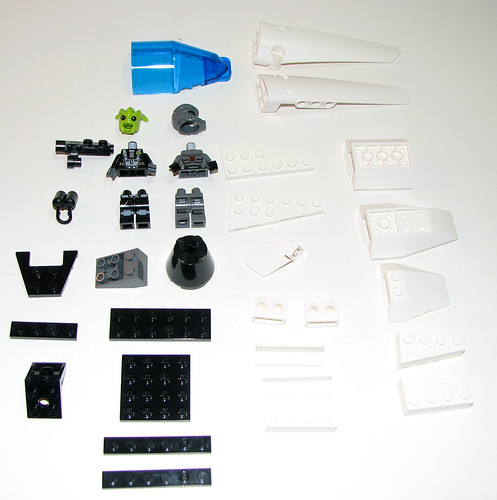 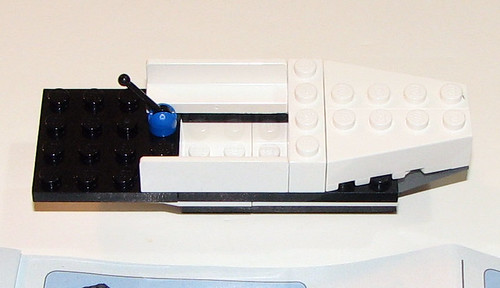 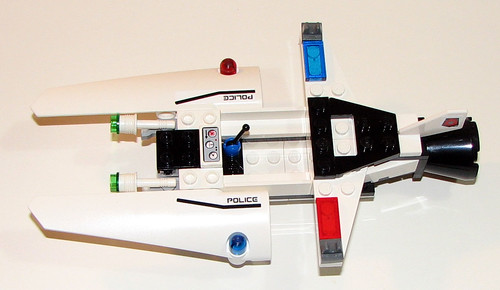 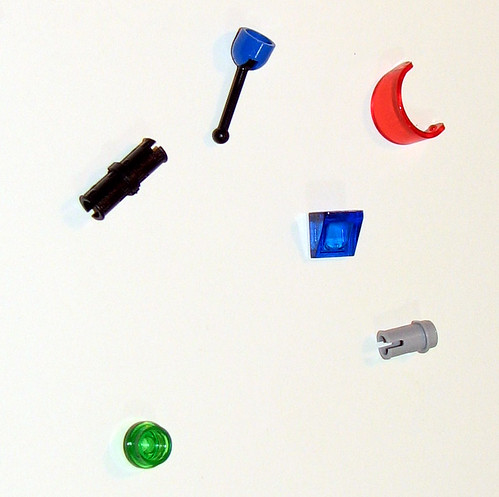 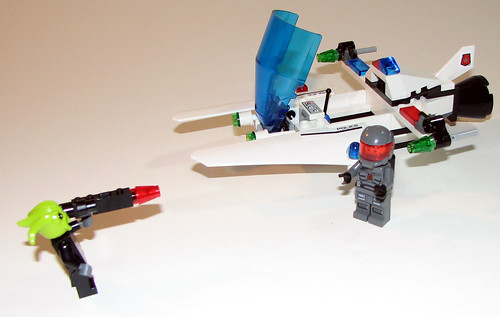 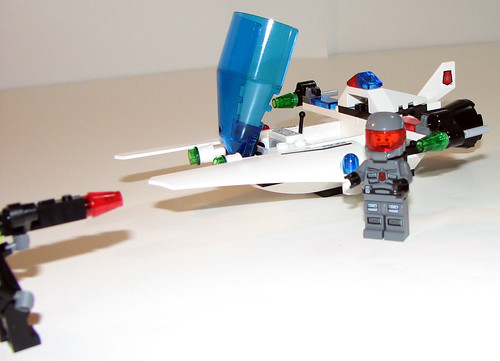 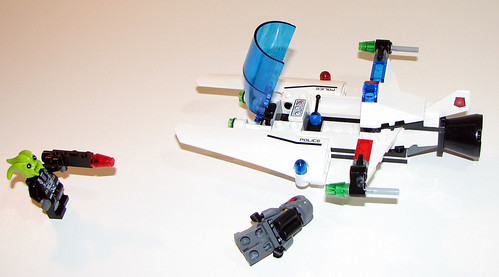 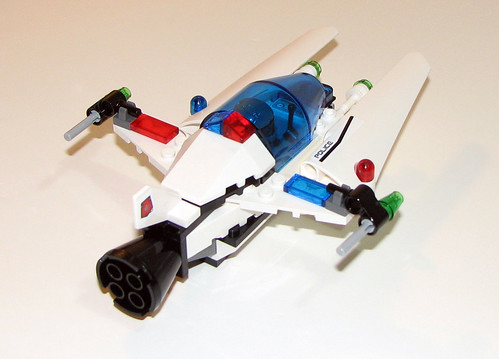 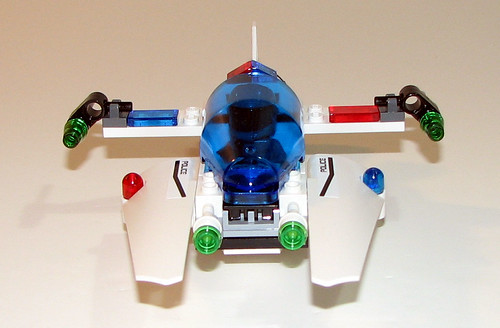 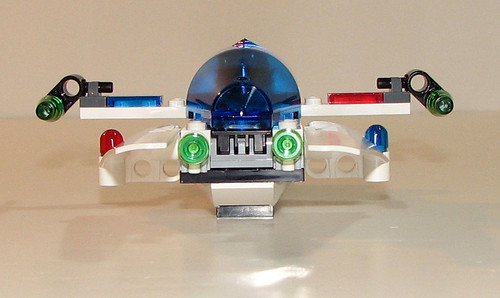 Thoughts – Pricing, Design, and Build:
I don’t normally do number scales, but if I did I would give this a 10 out of 10 for pricing, design, and build. LEGO could have easily charged a few dollars more or left out the alien minifig Rench and I doubt anybody would complain. The design is just that good – I’m not sure what else to say about it. This is one of those times where bigger is not better – had there been more pieces or had it been larger, I don’t think it would be nearly as elegant and simplistic-looking as it is. The cockpit design is perfect – there is even a joystick for the pilot/police officer minifig, and there is plenty of room for a minifig in a spacesuit. The canopy pivots forward instead of up, and it’s a nicely designed feature – it helps keep the profile of the spacecraft very low and minimal.

Thoughts – Parts and/or stickers:
First, let’s get the stickers out of the way – they are very minimal. Two of them are tiny badges/signs on the tail, one is for cockpit instrumentation, and then you have two “Police” stickers on the sides. You could easily skip the outside stickers and not miss them too much – thanks to the red and blue transparent pieces and their placement, it’s pretty clear what this vehicle is meant to represent. As far as the parts – everything has its place and it doesn’t feel like anything is out of place or unnecessary. The flick missiles work and pivot up and down, there’s a nice amount of transparent parts, and I can easily imagine people buying several of these for use with MOCs – almost all of the pieces can easily be reused across a lot of vehicles. It’s got a surprisingly roomy cockpit for such a small vehicle.

Thoughts – Minifigs:
You get two minifigs along with a nice space vehicle so it’s hard to lose her. The spacesuit-equipped minifig has a double-printed head and the suit is nicely designed. “Rench” the alien has a weapon that if you raise his arm, actually has a scope that lines up with his eye – that’s a very nice touch.

Conclusion:
The 8060 Typhoon Turbo Sub is still my favorite under-$50 set in the 2009/2010 stable, but this is a very close second. It maybe hard to believe, but this is one of those times when a set is just perfect – the perfect price, the perfect size, and the perfect minifigs. As I said earlier, LEGO could have opted to only have one minifig or raise the price a few dollars and I doubt many would have complained. I can easily see a lot of people buying more than one of these for the parts or just to have multiples of these, perhaps leaving off some of the stickers.