This is a review of the static set from the LEGO Atlantis universe, 8061 Gateway of the Squid. This set makes a great desktop model. The set is reminiscent of a few of the LEGO Indiana Jones sets which is why I was a little hesitant about buying this set. One of the best parts of the set is that you can mount the giant black squid atop the main structure which makes this ideal for setting up on display.

By the Numbers:
Set: LEGO 8061 Atlantis: Gateway of the Squid
Type: Static playset in the new Atlantis line
# of Pieces: 353
# of Minifigs and what kind: 1 X Female Diver, 1 X Male Diver, and 1 X Squid Gatekeeper.
Stickers? One sheet of 3 stickers
Price: $39.99 at Official LEGO Store, also at Amazon.com (prices may vary at Amazon) 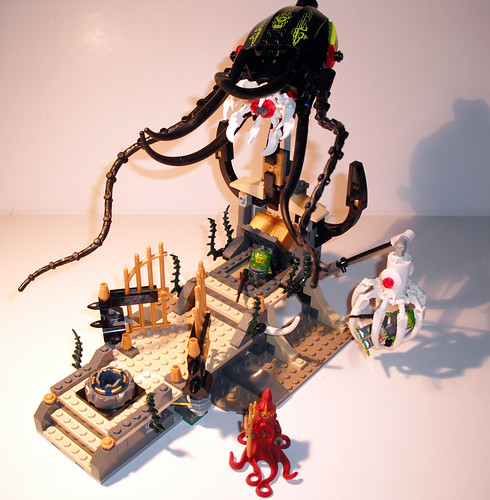 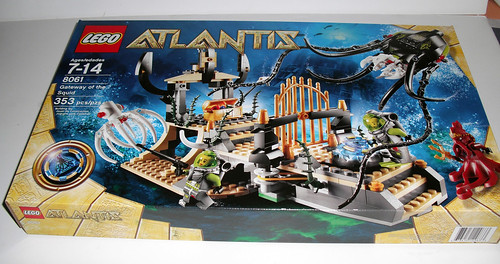 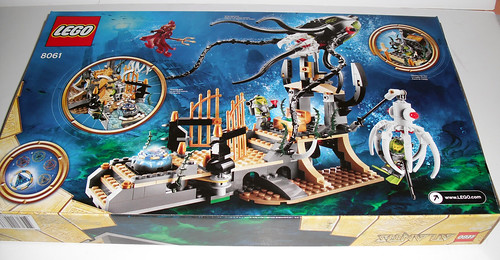 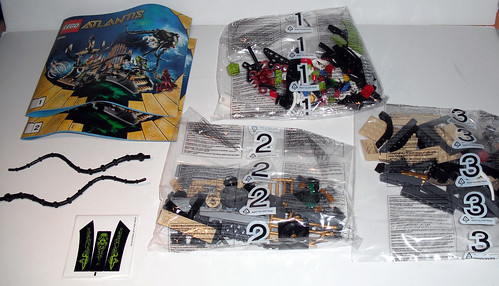 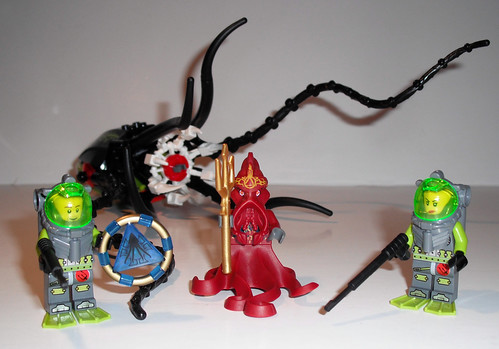 Thoughts – Pricing, Design, and Build:
The price is a bit steep considering what you don’t get (a large number of pieces), but the unique figures and the giant squid (which you have to build) makes the set worth buying. The design is nice. It is pretty small, and will leave you feeling sort of cheated when you look at the size of the end result, but enough about the negative aspects. Even though it’s a pricey for it’s size, this set is still super cool. I really found the building of the giant squid to be fun and different. That’s the one excellent aspect of the Atlantis series, so far; instead of LEGO cranking out a bunch of figures of sea creatures, they require you to actually build the monsters rather than taking the LEGO horse option. The giant squid is as fun as the Atlantis Guardian of the Deep shark. The tentacles are poseable, and the hinged center claw makes it a formidable threat to all your little Atlantis divers. You might have to drag the LEGO Aqua Raiders out of mothballs to help fight this thing. The gate mechanism requires a round Atlantean key to open it’s golden doors. This set includes a blue squid key which drops into a slotted, round base which (when turned counter clockwise) opens the gates. The trap door under the treasure chest beyond the gates is a nice touch, and seems at home in the LEGO Indy universe. There is also a white squid that hangs off a construct made of LEGO Technic parts and a Castle Series lance. The white squid’s “legs” can be used (like a cage) to trap your minifigs.

Thoughts – Parts and/or stickers:
The parts are all pretty common. No pieces stand out as unique although the gold treasure chest, and four “jewels” are a nice addition here. There’s only 3 stickers, and they’re for the giant squid.

Thoughts – Minifigs:
The red squid gatekeeper(?) is one of the most unique figures I’ve seen outside of the Star Wars sets, and I’m glad I have one. It’s also nice to see a female diver figure. I’m guessing that this is the professor’s granddaughter based on the Atlantis log at LEGO.com.

Thoughts – Swoosh factor, playability and integration with other sets:
This set will be great for anyone who still plays with LEGO sets (as opposed to just collecting them). It provides a place for your Atlantis divers to explore, and battle it out with the giant squid as it defends its treasure from your figs. Besides, this set is our first stop to finding the lost city of Atlantis, so it’s a good idea to buy this set just to be one step closer to discovering it.

Conclusion:
One gripe I’ve noticed from other critiques of this set is that people have a hard time grasping why the divers don’t just swim around the gates to get the treasure. I offer this explanation: maybe the gates have to be opened with the key in order for a magical forcefield to lower to allow access to the treasure, or maybe the keyed access prevents the squid from attacking the divers (until the proper key is inserted into the pedestal). Use your imagination, folks!