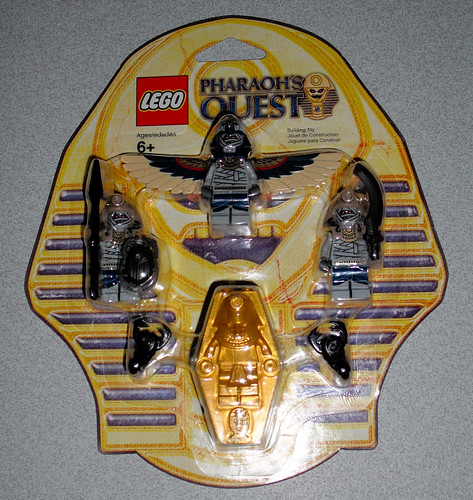 Fans of the Kingdoms battle packs will be a little disappointed with this item, because it comes with only 3 minifgures (compared to the LEGO Kingdoms Battle Pack’s five minifgs). While it does have a nice selection of accessories, it is pricey considering the Pharoah’s Quest 7306 Golden Staff Guardians set comes with the same amount of minifigs, roughly the same type of accessories, a motorcycle, and costs $5 USD less than the Pharoah’s Quest battle pack. Although I don’t have a major issue with the lack of a weapon for the winged mummy (as I have extra weapons in my parts bin), other LEGO aficionados who may not have extra spears to hand out to their armies, will be a little miffed.

The upside to the battle pack is that buying it is the easiest way to beef up your undead army to battle the good guy archeologists. The printed decorations are excellent as one would expect from LEGO. The embossed details on the sarcophagus’s lid is of keen interest to me, because of it’s level of intricate detail. The hieroglyphics and the “engraved” Egyptian prince (?) are really nicely done (and photograph well, too).

All in all, I feel this battle pack is somewhat lacking in terms of value for your money, but it is a nice addition to my minifigure collection, and compliments the rest of the new Pharoah’s Quest series just fine.