After much debate, I finally broke down and bought the new LEGO Kingdoms Advent Calendar at my local LEGO Store. There were some major deciding factors. First off, I love the Kingdoms (and Castle) series LEGO has been putting out, and figured this set would have items/figures that would compliment my current collection nicely. The second thing that came to mind was the simple fact that when these things are gone, they’re gone. The LEGO Store is the only place you can get this set, and still buy it for its retail price (MSRP $34.99). If you choose to take the online auction route to obtaining the Kingdoms Advent Calendar, don’t be surprised if the bidding surpasses the $50 mark! 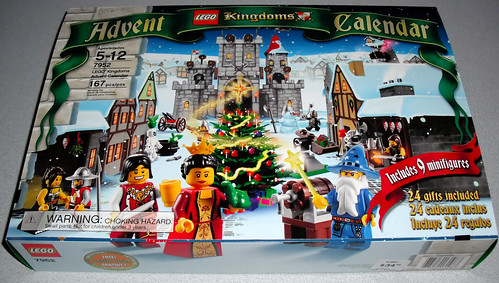 Actually, there was third factor in buying this one: they didn’t make a 2010 LEGO Harry Potter Advent Calendar, so the Kingdoms set was the next best thing.

For those of you who do not know what an advent calendar is, I’ll tell you my view. An advent calendar is usually a bigger deal in Europe. Usually, these types of calendars come with chocolate. Starting on December 1st (these calendars celebrate the days of Advent leading up to Christmas), a little flap with the date is opened to reveal a piece of chocolate that is usually shaped like something associated with the holiday (i.e. a snowflake, deer head, X-mas tree, etc.). For the remaining days leading up to Christmas, each day contains a different piece of chocolate, or some other candy. The same concept is applied here, but instead of chocolate, LEGO figures and accessories are the daily prize. So as not to spoil the fun for you who do buy this item, I won’t say what’s in the set. We will probably post the item of the day starting December 1. I have opened the entire set, and had some fun putting the figures and other things together.

Anyone who has been kinda irked about the bad guy to good guy ratio in the current LEGO Kingdoms series need not worry about getting reinforcements any longer. LEGO stores across the country have been carrying Kingdoms minifig Battle Packs for all you Castle System fans to beef up your forces. Each pack of knights/soldiers comes with five well-armed figures for $14.99 (USD). You can find them through third parties such as the Amazon links below, but you won’t find them for $14.99 – that is a price you will only find through the official LEGO stores (unless you get lucky). This price point is very acceptable when you take into account that figure packs from other series are not as accessory-equipped as these are. Also, the Build-A-Figure kiosk at the LEGO stores never really has a good Kingdoms/Castle selection of figure parts in my experience, so the two battle packs in this review are very much welcome to all the fans of LEGO’s medieval themed sets. 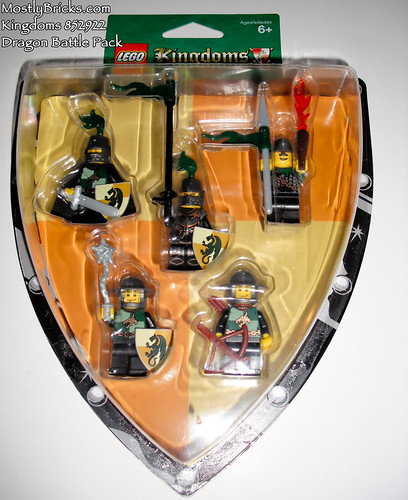 There will be more photos coming, but this is a fairly short review, given the subject matter.

BrickForge has underwent a massive overhaul of their website and has announced that they are releasing 12 new accessories later tonight through Twitter. BrickForge is a site/shop dedicated to minifig customization. There is a cryptic note on their Facebook page: Brickforge to release 12 new accessories at 12PM Eastern Standard … Read more