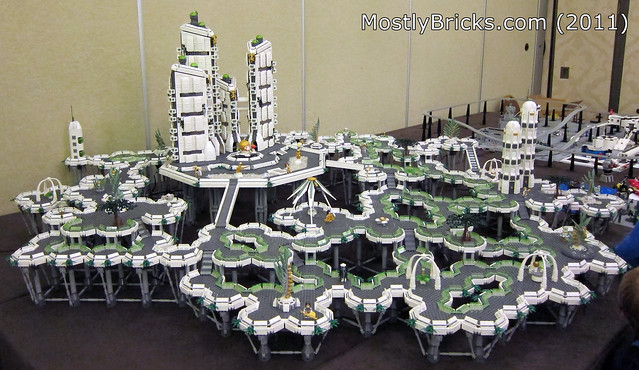 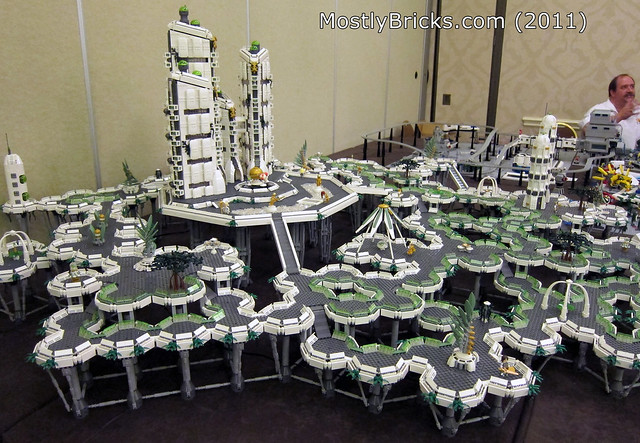 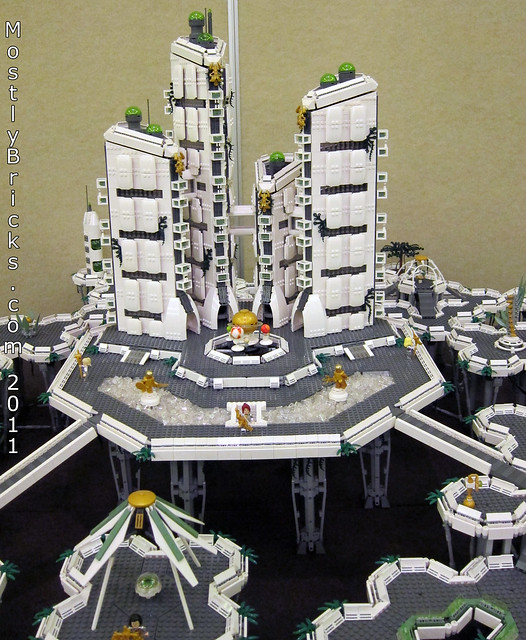 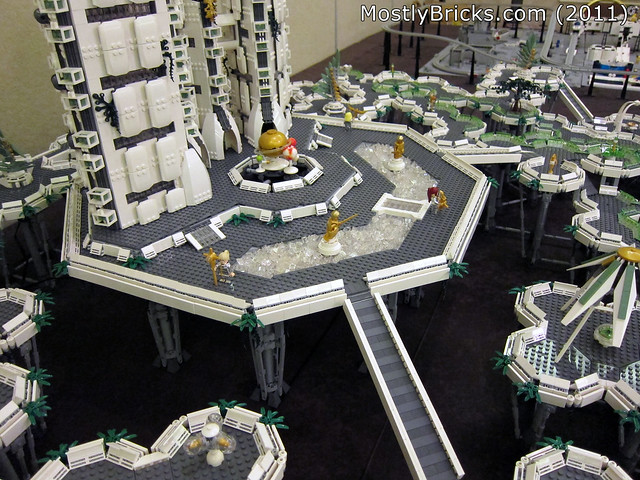 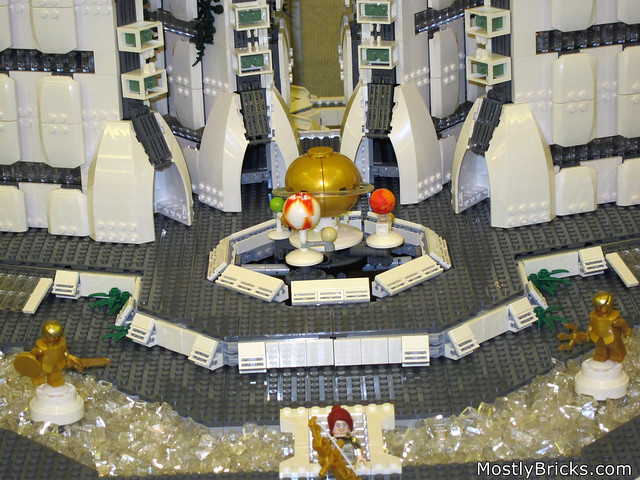 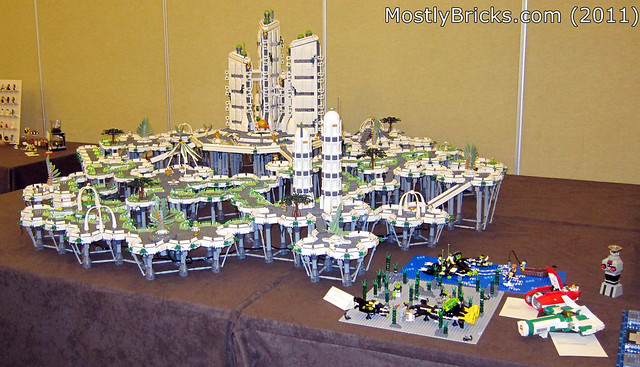 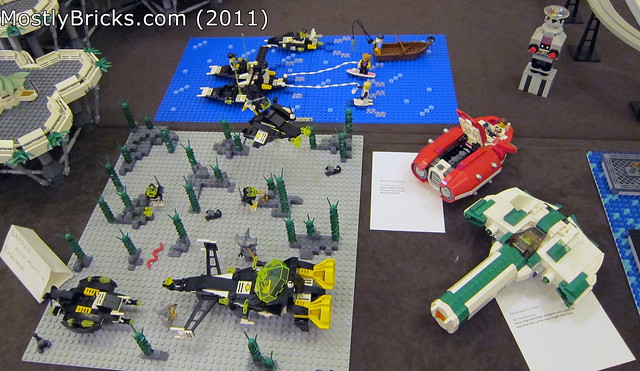 The larger MOC on the left is “Blacktron: Mission Atlantis” (2011) by Ethan Balmer, a unique take on merging Blacktron and Atlantis.

The red creation you see in the upper right is titled “Red is Fast”, a 2010 MOC by Nathan Jones. “Jimmy spilled his drink in his new shiny hotrod. Because red is fast.”

The green and white one below is titled “Spearmint” and is another 2010 MOC by Nathan. “Short range anti-cruiser starfighter with a powerful laser that takes up the entire length of the new.” 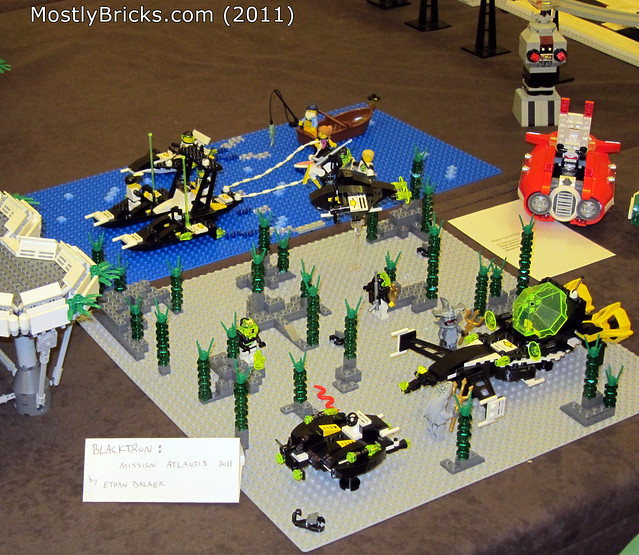 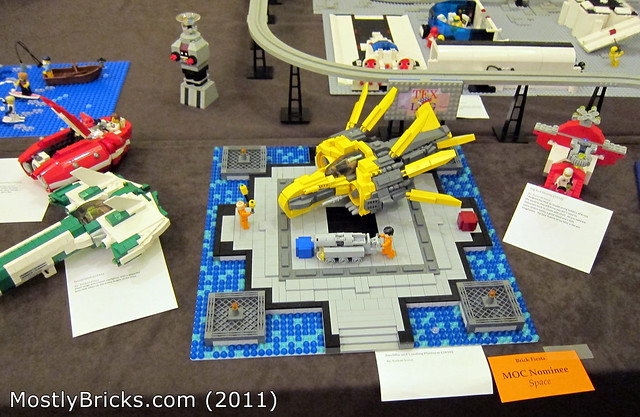 This was another Nathan Jones creation, from 2010, the “Devlifin and Landing Platform” – I maybe spelling it wrong. 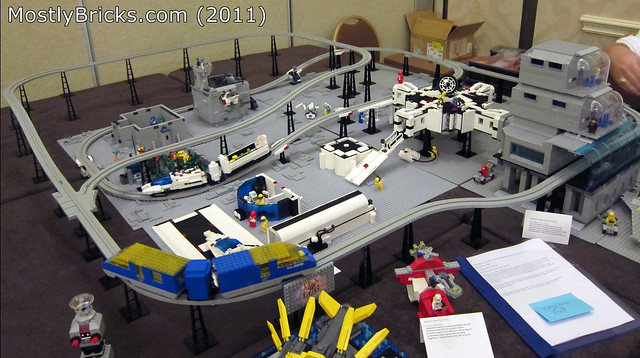 Many of these old school Space and Lunar-themed creations and sets are from William “Pat” Hough who came up from Houston. On the right of the monorail system, you can see a 2010 MOC, Kepler Condominiums (2010) by William “Pat” Hough “Here at the Kepler Condominiums, we take the doldrums out of lunar living. Whether you prefer upscale viewing entertainment, the latest technological innovations, or an unparalleled view of the lunar landscape, Kepler is the place for you!

To the lower left is the “Big Red Shuttle”, a 2010 creation from Bryce (not sure of the last name), who states “I designed this MOC to inspire young builders all across the world so they will know you don’t need an instruction book to create with LEGO. All you need are some random bricks, a good mood, and a little imagination.” 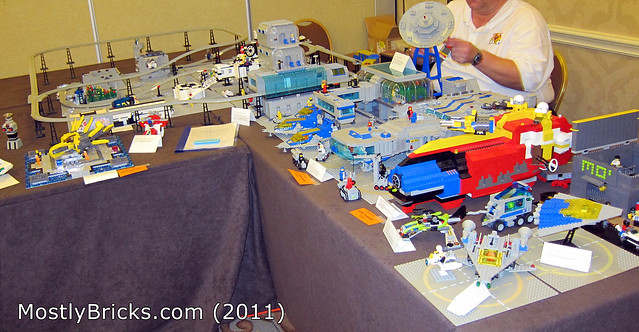 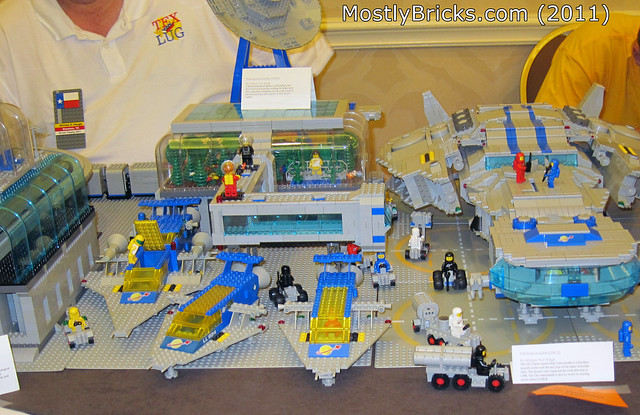 The garden/greenhouse in front of the communications dish is another MOC by Pat, “Hydroponics Garden” (2010) which is a “domed hydroponics garden containing flora and fauna from several worlds, including the fabeled Earth. Here, moonbase inhabitants can take in the scents of the forest and visit wild creations in their natural habitat”

If any of you are featured in these photos or have MOCs or other LEGO sets featured, I’d be happy to send an original copy without our watermark, just contact us!