As some of you readers might already know, some of the 2011 LEGO Atlantis sets are out, including Atlantis sets popping up at your local LEGO store, if you’re lucky enough to have one nearby. In this article, I will be reviewing one of the three 2011 sets that I’ve seen come across, the Atlantis Sea Strider. 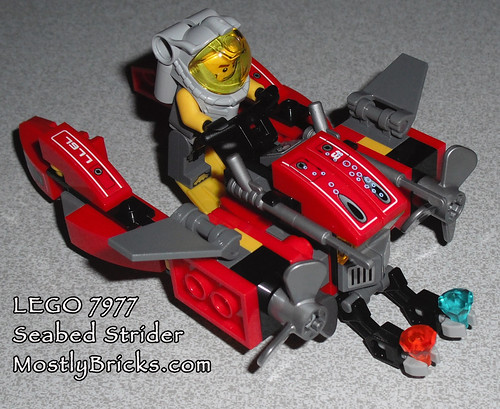 The Sea Strider is a two-legged mech that transforms into a little underwater exploration speeder. This set is sort of like the little brother of the larger LEGO 8080 Atlantis Undersea Explorer in that they both transform from vehicles to mechs in their search for the lost underwater city. Transformation is quick and easy; just flip the legs back, and it’s ready to outswim the Guardian of the Deep…maybe! Armed with grabber claws and powered by two aluminum propellers, it should have no problems carrying out its mission. The Seabed Strider is a simple set to construct (105 pieces, some stickers), and is reasonably priced ($9.99 USD).

Remember, click on the photos to see the large versions, or visit the full LEGO 7977 Atlantis Seabed Strider review gallery at flickr! 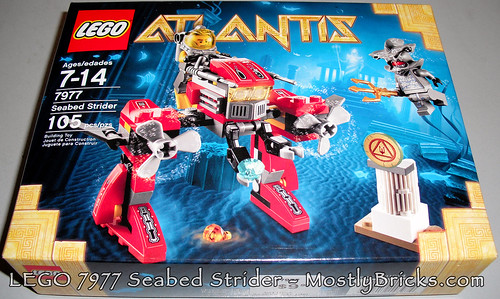 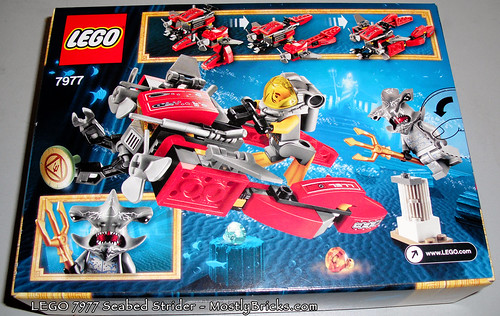 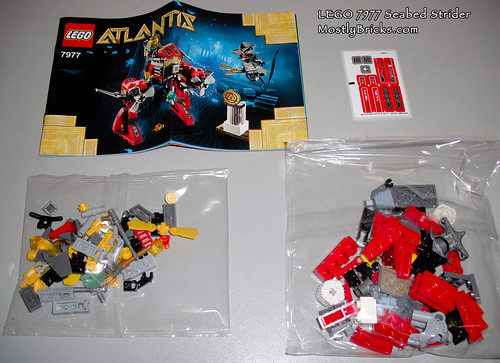 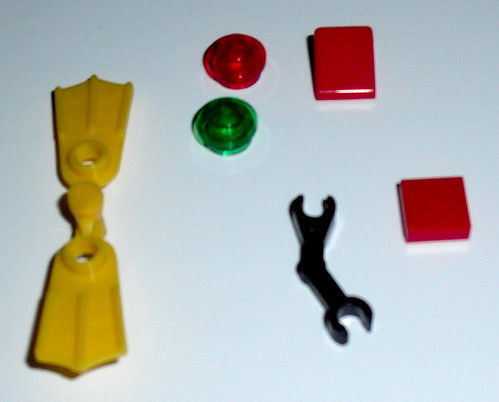 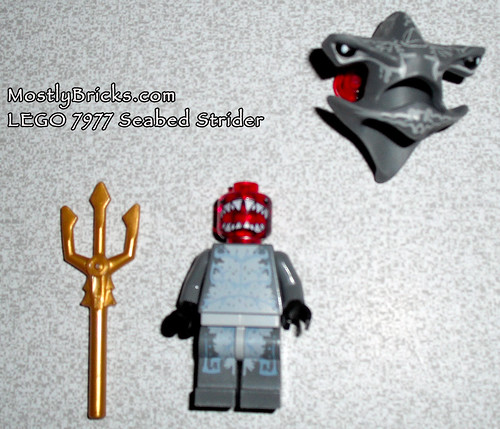 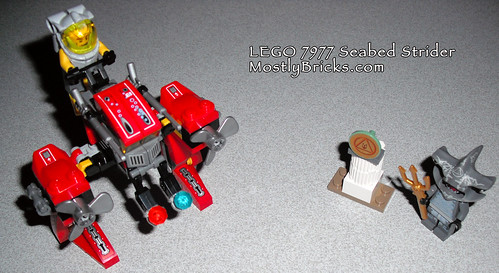 Thoughts – Design
The first thing builders will notice are the new colors for the LEGO Atlantis line. Gone are the lime green colors of the 2010 Atlantis products; now replaced by yellow. While yellow is a more realistic color for underwater equipment (in the real world), because it is easier for the human eye to see, I still think the green looks better. The Power Miners green bricks from the older Atlantis sets were more aesthetic, and didn’t remind me of McDonald’s as much. Yellow just doesn’t look right here. This also means there’s no more green arms and green flippers on the minifigs. The clear diving helmet faceplates are also yellow, and the helmet/backpack piece is a lighter gray than the ones found in the previous line. I guess, since the Atlantis storyline has progressed to a new phase, LEGO thought it was necessary to give the line a new look for the next part of Team Atlantis’s mission.

The most welcome change to the Atlantis sets is the elimination of Atlantis keys. I have seen the other new sets coming out, and the artifact selection is way more diverse. The Seabed Strider comes with a shield with a printed design. It sits atop a “broken” column (with nice grooved column pieces), and is guarded by a new Atlantis minifig; a hammerhead shark man (see pics) armed with a trident.

Other accessories include a pair of gems. The standard LEGO theme of crystal hunting has finally carried over into the Atlantis line. The other set that will be reviewed soon, Angler Attack, also comes with gems and even a treasure chest. I assume that LEGO will explain the significance of these items in the Atlantis section on their website.

Thoughts – Parts & Stickers/Decals:
Some will moan and groan over the stickers, but it really adds depth to the model. Without stickers, it looks lame, because it lacks detail. A few vents and panels here and there look really good here. It is a great set to buy for extra parts, though. I recommend buying one to build, and a few other to use as extra parts for MOCs. The selection claws, curves, and hinges are worth spending 10 bucks for each additional set.

Thoughts – Swooshability:
This is one of the few LEGO sets (and one of only two in the Atlantis line) that transform from one vehicle type to another. Of course it’s swooshable!

Conclusion:
So, is the set cool? For a kid who needs to practice building slightly more complex sets than some of the others; yes, this is a cool set. For an adult, the entire set will take little, or no time constructing.

If you are lucky enough to have a LEGO store near you, then I suggest running over there to buy one of these so you, or your child, can be the first on your block to have one. If you don’t have one, or can’t get one right now, then these sets should be arriving in retail stores around January, or February.