It’s Day 5 of our countdown to the 7th Harry Potter movie, Harry Potter and the Deathly Hallows, and as part of our little celebration of Harry Potter and LEGO, we feature another custom MOC from a scene that will feature prominently in the 7th and 8th movies.

It’s from zaberca (flickr) and focuses on Harry Potter and Hermione Granger visiting the ruined cottage that Harry’s parents were staying in when they were killed shortly after his birth, and where he was branded with his infamous scar by Lord Voldemort. The cottage was partly destroyed in the fight that claimed the lives of Harry’s parents, and in the 15 or 16 years since, nobody has moved to clean it up or claim it. 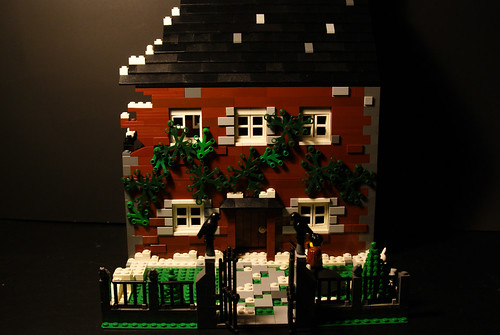 There are two more photos in the series, and they can be found here and here. zaberca acknowledges a slight continuity error (Ron being there), but the set is worth a look. Given that we don’t have an official LEGO set of this area, zaberca has done a wonderful job recreating it in minifig scale. There is a clever use of tiles to reflect the damage and the accumulated snow. The scene takes place in the winter, I believe at night, which is mirrored with the dark/shadowy photos.