A week from today – next Friday, November 19, 2010, will see the release of the seventh Harry Potter movie, Harry Potter and the Deathly Hallows Part 1 (official trailer), and in celebration of that and of the return of the Harry Potter franchise to the LEGO universe last month, we’ll be making a post a day celebrating some LEGO-related aspect of Harry Potter. That means reviews of both old and new sets as well as highlighting some of the cool things that people have done over the years with LEGO and Harry Potter, up to and including MOCs. Some of these have been highlighted in the past on other sites, some of them maybe new to you.

Today’s highlight is a series of photos on flickr from “Legoagogo” and are fairly recent, from September and October of this year. They feature a mix of LEGO pieces from the new Harry Potter sets to MOCs to a custom Firenze (the horse/centaur half of his body is from BrickForge) in a scene from the first novel/movie below. 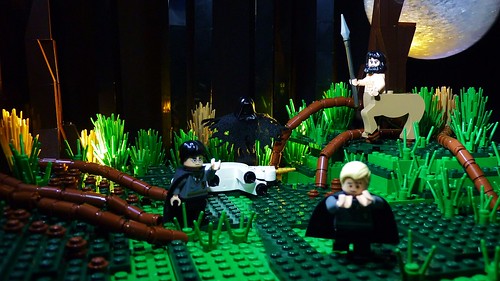 Legoagogo has an extensive gallery of really excellent LEGO photos. Give yourself half an hour or two and poke around there – you won’t be disappointed.

If you have any suggestions for Harry Potter tributes, and we don’t have to stop with the movie’s release or limit ourselves to one a day or to newer material, by all means contact us.