Earlier this week I picked up a LEGO 5974 Galactic Enforcer from the Space Police line at my local Target for $50.48 plus tax. That’s 825 pieces, including some good minifigs and a lot of really cool parts that are hard to find elsewhere.

Chances are the set I picked up this week from the Space Police line is being cleared out to make room for the new Alien Conquest sets, which are filling in the gap that Space Police will leave. Even though the sign prominently says 30% off, it is 30% or more, and the set I picked up was obviously more – originally the Galactic Enforcer was around $100. I had been wanting this set for a while, since it came out, but I was always tied up with other sets.

Clearances are going to vary by store, as some stores may have more in stock of certain sets than others, but there will be a lot of shelf-clearing going on, as room has been made for Pirates of the Caribbean, and the upcoming Alien Conquest and Cars sets in addition to other lines that are rolling out new offerings (or are themselves new). The location of the clearance area is also going to vary – in my case, it was in the toy area, on the end of an aisle, but some stores have an aisle off in the back dedicated to it. 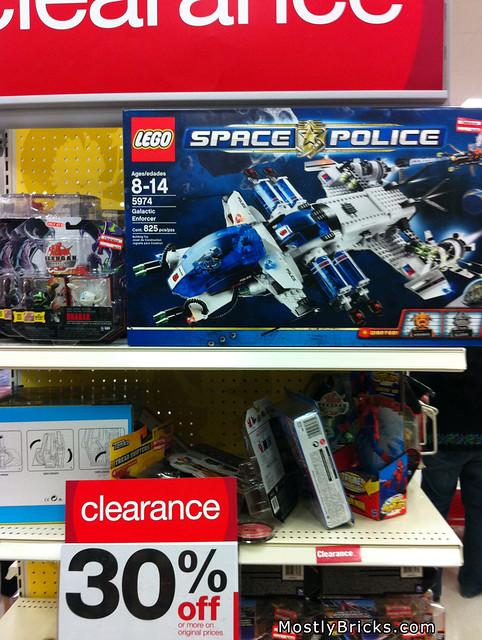