It seems that more and more Atlantis-themed MOCs are making their way onto the various photo and LEGO-related sites. The first one we mentioned was the Atlantis Finder from gipmetro which would make a great set – it’s actually from the journal of Dr. Artimus Rhodes and depicts Dr. Rhodes’ submarine.

In no particular order, here are some more custom creations that are not as “historically accurate” as gipmetro’s, but still very cool and/or fit in well with the Atlantis theme.

First up: Atlantis.LEGO.com – Gallery from the LEGO FUNZONE – there are too many to list, and lurking amongst them are many a rainbow warrior, but plenty are interesting to look at.

Next: Bricknave’s flickr gallery has a Dual-Cockpit Trident Speeder 2, which is a very unique MOC since it was built entirely from the pieces of the Neptune Brickmaster Mini-Sub promo: 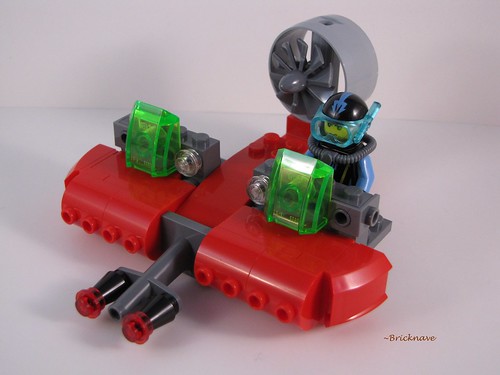 It was quite a challenge to build, because I only had one turbine to work with. :/

This just goes to show that even the tiniest of vehicle sets without Minifigs could be turned into something for a Minifig to ride. In this case, two. This is exactly why LEGO is the ultimate toy.

The Dual-Cockpit Trident Speeder is a small two-person craft used mainly for battling hazardous deep-sea creatures and scouting missions. Although hindered by having only one turbine, the mini-sub makes up for it by having dual micro-floodlights and an electrically-charged trident weapon on the front. PILOT WARNING: Do not step in front of the HyperCharge GL-675 model turbine, doing so may cause you to be sucked into it and well …….. You get the idea.

Next we have: Atlantis A-21 Mini Turbo Subs from The2ndninja: 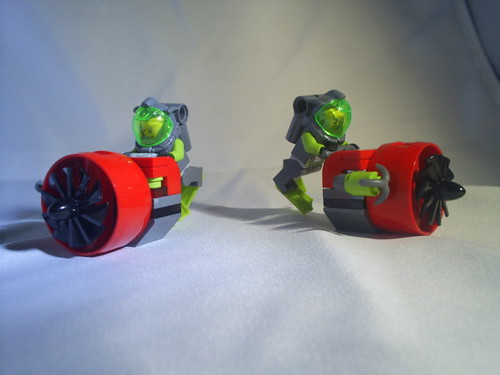 Contains:
Big Engine to move
Harpoon to grab things from a distance or to take down enemies

Now we have the ‘Tail Fin’ Speeder from NewRight :

The fast moving underwater speeder for the crew of MISSION: ATLANTIS. Nicknamed ‘Tail Fin’ with top speeds near 70 MPH is can help with fast travel for the crew of the mission.

Containing about the same number of pieces as a fair priced $10 set. I don’t know if it shows, but I don’t actually own any Atlantis sets, but I thought the entire idea was need so I went for it. I do also have plans to do maybe another of these red vehicles. Maybe by then I’ll have an actual Atlantis set.

Based off the $10 set ‘Cave Racer’ design

A few more (links only):

This is my Atlantis Grab-O-Bot. It is nothing special, just a little Tablescrap build from the parts of 2 Atlantis Impulse Sets/ “Underwater Scooter”-thingies. All parts were used exept the second diver.

Since the Atlantis sets are now available, i decided to get started on some Atlantis themed mocs. This is just the first of many mocs i’m planning on building for the group “the devil’s triangle” which is based on the lost city of atlantis.