I mentioned yesterday in my LEGO store notes that the Imperial Flagship would be available today (Friday, January 1, 2010). If you have $179.95 and want 1,664 pieces of Pirate goodness, and a great way to send off the Pirates line, the Imperial Flagship (10210) is now available in LEGO stores (2 that we know of) as well as the online LEGO store. This is the last set to be released in the Pirates line, at least for now. Whether we get a new Pirates line in the near future, perhaps a tie-in to the next Pirates of the Caribbean movie from Disney, is anybody’s guess. 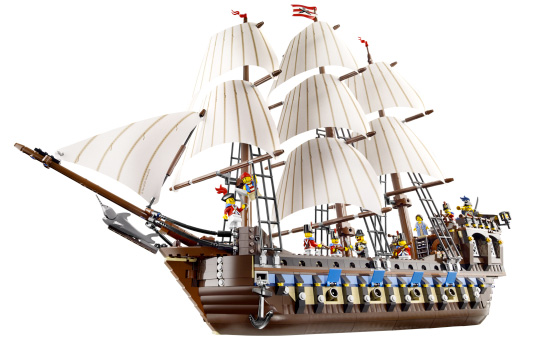 Specifications:
* 29.5 inches (75cm) long and 23.6 inches (60 cm) tall
* 9 Minifigures/Minifigs – Ship’s captain, captain’s daughter, pirate captain prisoner (with shackles), ship’s cook, lietenant/officer, plus four soldiers
* Ship is similar to some of the modular LEGO buildings – it can be separated into 3 sections, with sections lifting off of one another
* 4 firing cannons
* Moving rudder
* Fully-equipped ship’s kithen
* Anchor raises and lowers
* Includes masts and rigging

Hopefully we’ll be picking one up tomorrow to build and review.