If LEGO decides to do anymore of these army men sets, then I vote for a pack of airborne troopers like in the first Toy Story. I know they will never make a bucket of 100 LEGO minifig army men, but that would be awesome if they did. Maybe, LEGO can make a LEGO army men bucket to store these guys in. That’s just a suggestion, LEGO. Oh, and then package the bucket with some figs and maybe a green tank, or something.

By the Numbers:
Set: LEGO 7595 Toy Story Army Men on Patrol
Type: Vehicle in Disney/Pixar’s Toy Story Line
# of Pieces: 90
# of Extra pieces: None
# of Minifigs and what kind: 4 X Green Army Men
Stickers: None
Price: $10.99 at the official online LEGO Shop, also available at Amazon.com (price may vary) 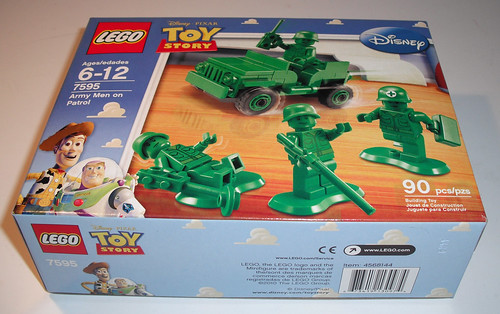 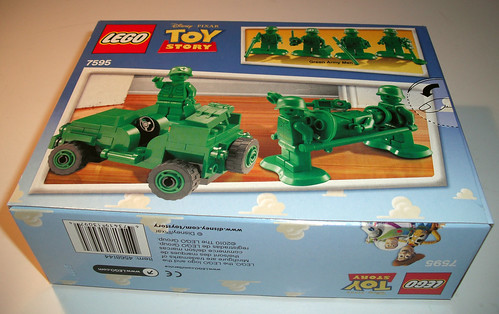 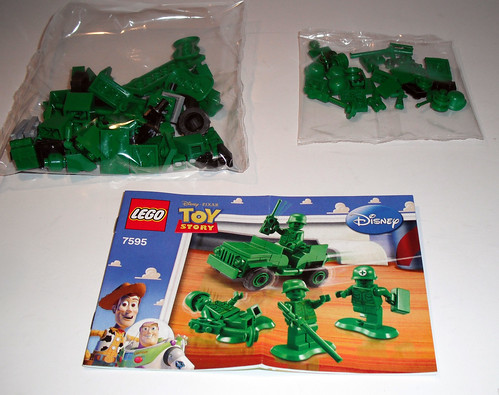 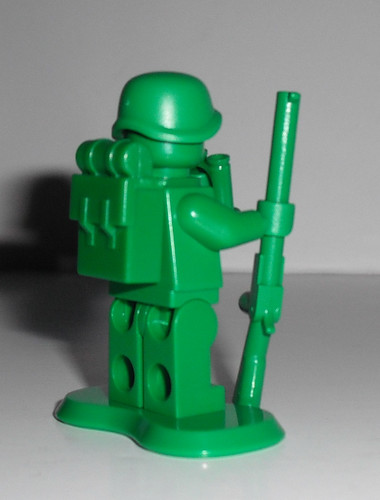 Thoughts – Pricing, Design, and Build: The price is a few bucks more than the Star Wars Clone Trooper, Stormtrooper, and droid packs, but is well worth the price. It has Disney’s name slapped on the package, so it’s expected to be a little pricier than other comparable LEGO products.

The design is very common for the LEGO universe: Minifigs and accessories. Just slap legs, a torso, a head and a piece of headgear together, and that’s pretty much what you have here. There’s nothing new and extraordinary about the design of a preexisting…um, design. The army helmets are worth noting as being cool, and the army men stands fall under the same category. The jeep is basic, and can be built by an experienced builder without the instructions.

The build time is the killer here. It took a tedious 6 to 10 minutes to complete. The basic complexity of putting rubber tires on their wheels and the painstaking effort to stand the figures on their two-stubbed stands was almost too much to take at times that I almost had to stop to take a breather. 90 pieces of LEGO have never been so intense. It was almost as difficult to assemble as the Clone Wars AT-OT Dropship. One tough set. The only way to keep my concentration while putting the jeep together was to have a Diet Coke on standby and Seven Bridges Road by The Eagles playing in the stereo. The pieces were so numerous that I had trouble keeping up with all 90 of them.

Thoughts – Parts and/or stickers: I liked the figure stands, the accessories, the army helmets, and the all green bricks and pieces.

Thoughts – Swoosh factor, playability and integration with other sets: It’s a pretty unique set mainly because of the all green parts and minifigs. I grew up on military toys, so I took a quick liking to the set the first time I heard of it coming out. It’s also pretty cool that this set comes with rifles, which (as most of you readers know) is pretty rare for LEGO to do. The set mainly fits in with the other Toy Story sets, but there is the minor detail of the fact that these guys are supposed to be really small compared to Woody and Buzz Lightyear in the movies. These Army men are the size of all the other minifigs, but that really shouldn’t be much of a concern unless you’re a real stickler for scale accuracy. If this is the case, then you might want to stop collecting LEGO products, because most of the large Star Wars spaceship sets are not to scale.

Conclusion: I’m just having a little trouble imagining Lee Ermey’s voice coming out of a LEGO minifigure! Just a thought, but it would be mildly funny to take a LEGO Joker head, and make you own Private Joker figure (for all you Full Metal Jacket fans out there). In the end, this set is really nice, and would make a great gift for the kids, military buffs, and the army enthusiast in your family