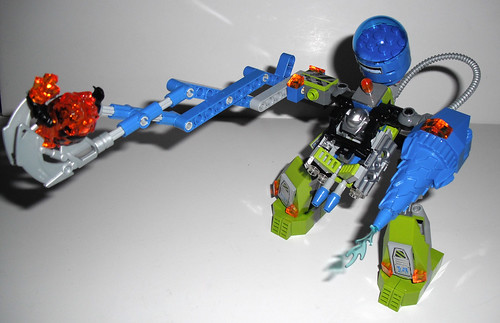 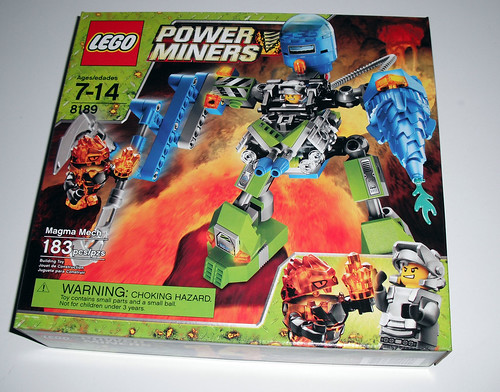 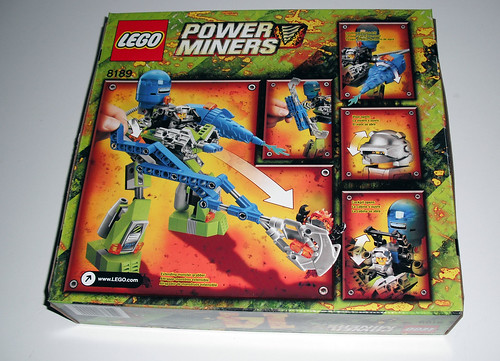 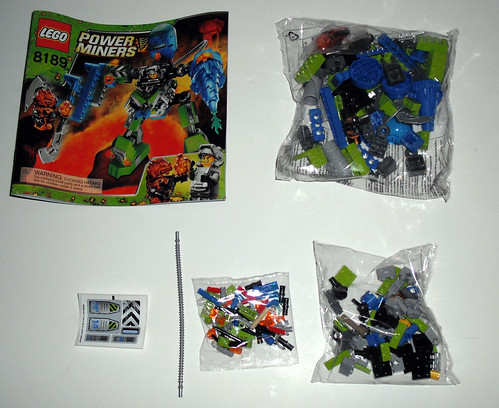 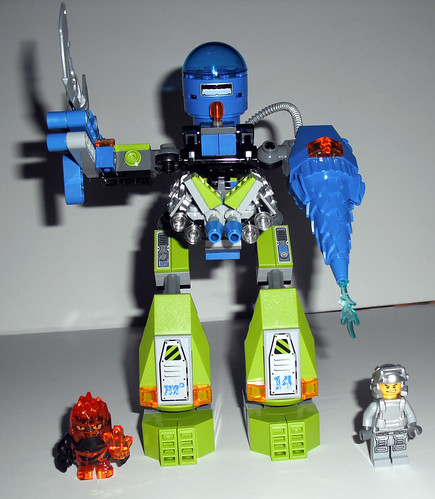 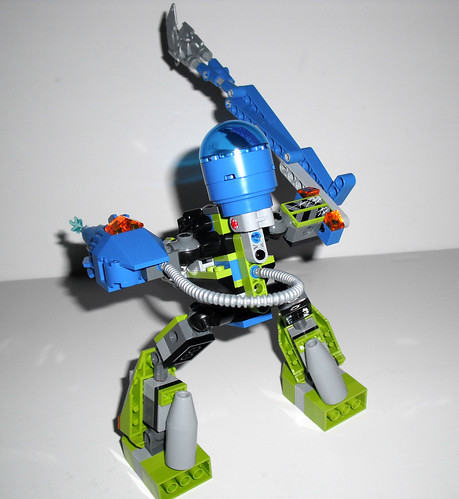 Thoughts – General:
The first thing I thought of upon seeing the mech, was that it reminded me of the Bionicle line, and the robot from the Agents 2.0 series. LEGO has had a fixation with giant robots for some time, and this set is no exception. This set is the companion piece to the Power Miners Water Blaster vehicle for 2010. I have only seen this set at Toys R Us as of this writing, and they must be pretty rare because there’s been a ton of them selling on eBay for outrageous prices. Is the high interest justified? Well, I wouldn’t pay any more than the 20 dollars this thing cost me, but that’s not to be taken as a put down. This set is very good. While it is not as attention grabbing to me as it might be for other Power Miners fans, I do have to say that it is unusual for the line (with the exception of the smaller mech currently available), and is…different. Among the other PM vehicles, this one carries the same colors and sticker schemes as its product line siblings, so it doesn’t seem like an outsider in the series.

Thoughts – Pricing, Design, and Build:
Well-balanced, arms are a little jiggly, and 20 bucks isn’t too bad for what you get. The 2010 Power Miners series seems to have undergone a few tweaks here and there. The first thing to get a little redesign are the human and the rock monster figures (see minifig thoughts below).

As you can see in the pics, the model’s main working feature is the huge grabber arm with scissor-like blades to do the grabbing. The arm is constructed with a series of blue Technic pieces and pins. The pins are arranged in such a way as to give it an accordion action to extend its arm. A small extended pieces of blue serves as a grab lever to control the arm as you grab LEGO pieces and/or rock monsters with the blades at the end of it. Ball joints hold the arm in place at the shoulder.

The mech’s left arm is comprised of a blue drill bit from the Thunder Driller vehicle (that one is gray, though), and has a clear blue LEGO “flame” piece sticking out of its tip (the flame serves as water here). The drill piece turns. The back of the drill piece has a gray hose attached to it which is, in turn, attached to a “water” tank behind the cockpit. Atop the tank is a nice, clear blue bubble to simulate a water filled tank complete with a water level indicator (which is a sticker in this case).

The mech’s initial stance is a little odd to me, because it hunches forward a little bit. This stance is necessary, though, because it helps balance the entire model (see pic with figures); but if you want to give it a more aggressive stance, then all you have to is adjust the mech’s ball-jointed legs (at the waist) and ankles (see pic).

Thoughts – Parts and/or stickers:
I’m a fan of LEGO stickers. If you don’t plan on taking this thing apart so you can build something else, then use the stickers. Nice green parts with a few neat silver ones, too. There’s also lots of useful parts here should you want to strictly buy it for the parts. My gears are already turning; thinking of new vehicles and add-ons I can use the pieces for.

Thoughts – Minifigs:
Firax, the updated version of Firox is extremely nice, and the new silver look for the Power Miner figs is pretty nice, too. The human minifigs are now equipped with silver flip-up visored helmets complete with new, gray/silver uniforms, and a silver chestplate/body armor from the Agents 2.0 line. Silver is the new color here as you can see in the pics. The new Firax is actually beautiful. I know that sounds odd when describing a LEGO minifig, but the little guy is really nice looking. Firax is quite a bit different from Firox, his old version, in that he is now mostly clear orange. I’m looking at him across the room right now as he sits under my lamp literally glowing orange. His eyes come to life against the clear orange. All the gray areas on the older Firox are now either black, or clear orange. He’s really cool looking. I know he’s made of fire, but “cool” was the only word I could use. His mouth still flips open like all the other rock monsters do.

Thoughts – Swoosh factor, playability and integration with other sets:
Set will fit in nicely with the rest of the Power Miners sets. Kids will love the giant robot factor. Adults will be reminded of Ripley’s power lifter from Aliens. As mentioned before, this makes a great adversary for the Crystal King.

Thoughts – Conclusion:
All in all, this set was not a huge challenge to assemble, but it was a fun, quick build. It is suitable for both LEGO beginners and vets, and has high play value for those younger LEGO Power Miners fans who need something formidable to battle the Crystal King. Again, the Firax figure is cool even if you already have him from the 2009 sets. It adds a little variety to your rock monster army to have a few different looking ones. The new Power Miners look is also nice. It’s a bit of a welcome change-up from the normal yellow and blue motif that they’ve had for a while now. If you can find one (at Toys R Us), then you really need to buy it along with its companion piece 2010 Power Miners 8188 Fire Blaster. This set will make a great gift for the kids this season, and will ensure they are the coolest on the block (since these things won’t be available at other stores until next year).