This review is for the Creator 5866 Rotor Rescue, a 3-in-1 set from LEGO that also includes instructions for building a speedboat and a biplane. It was purchased from a Toys R Us on November 20th, 2009 for $12.99 (I mistakenly said $10.99 earlier), but that may not be the final pricing. I’ve not gotten around to the other two alternative models, but will this weekend. There is not a lot to say – it’s a Creator set, and it’s got a lot of flexibility and a lot of really useful parts, especially if you like red and yellow 🙂

This is one of those sets where the pictures speak for themselves. 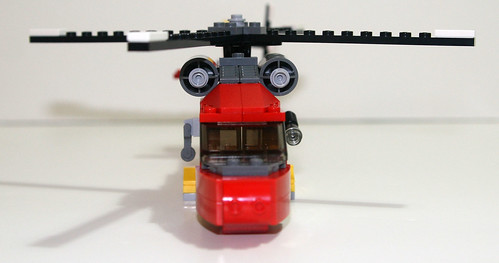 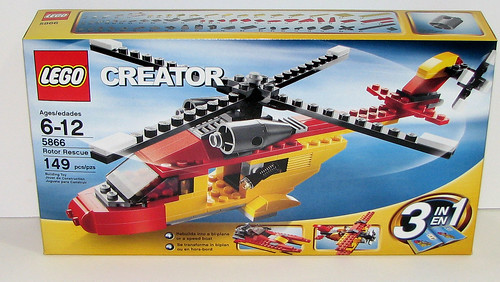 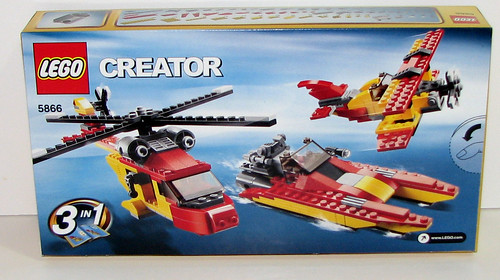 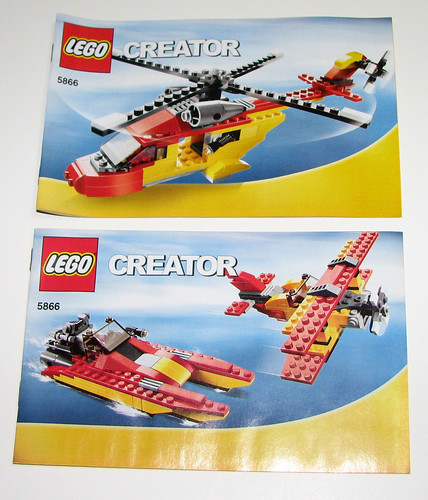 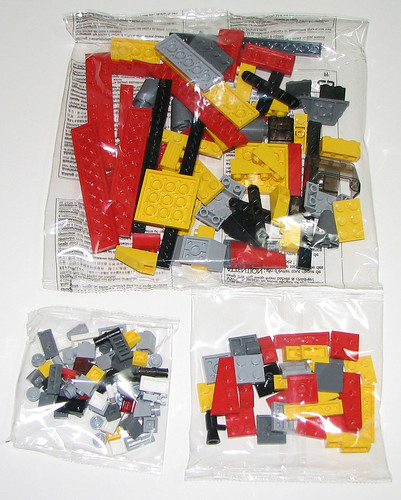 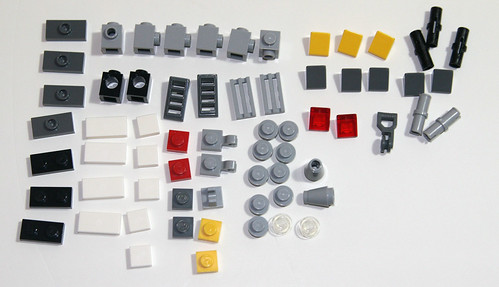 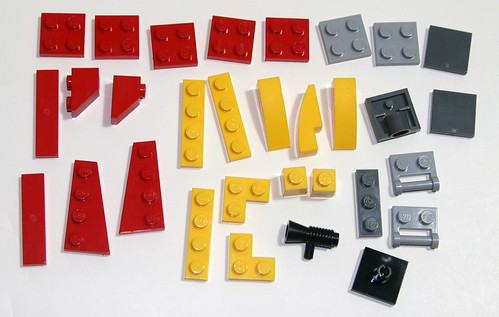 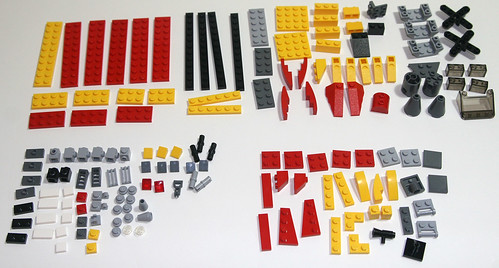 Some photos of the assembly and sub-assemblies: 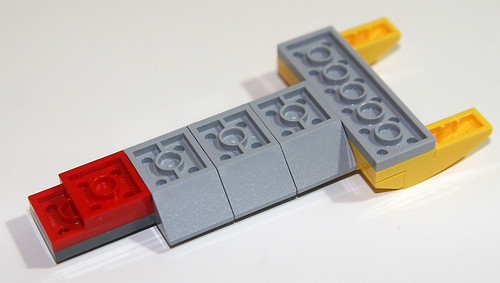 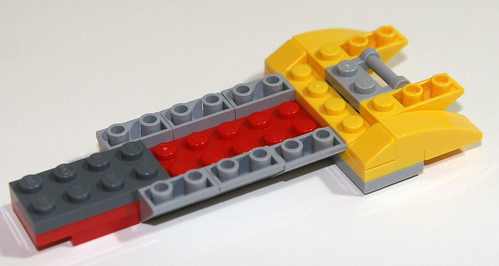 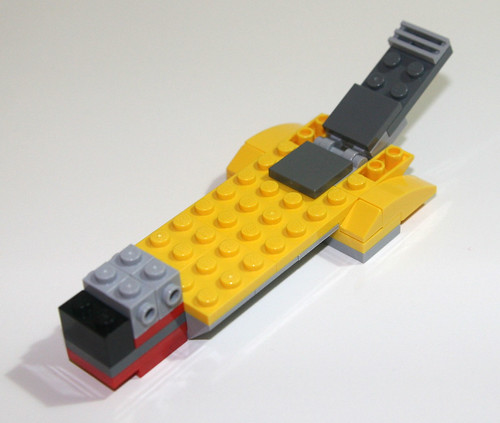 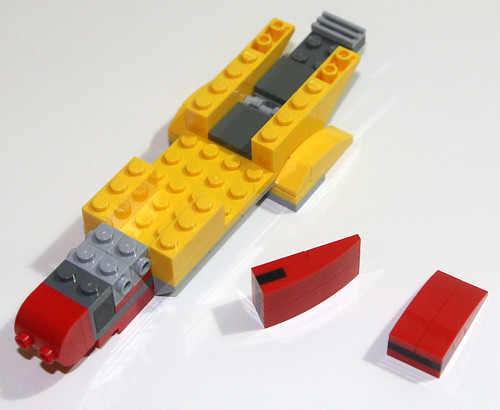 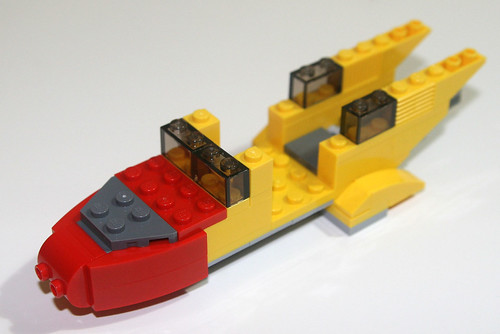 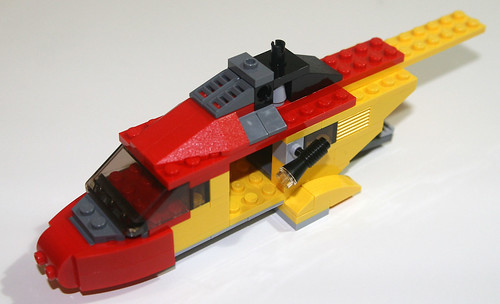 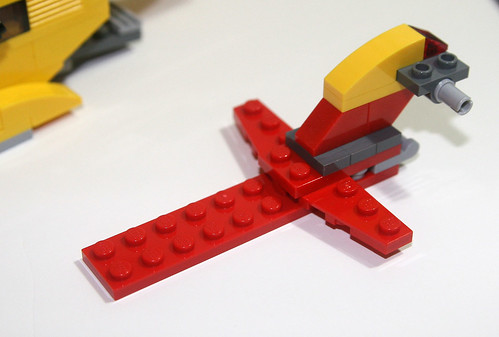 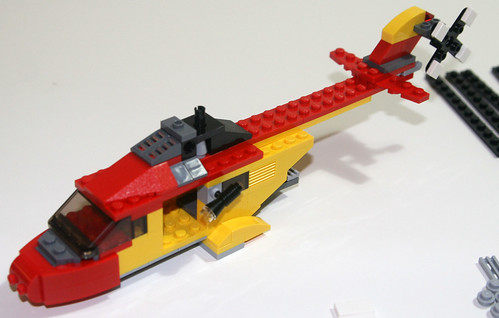 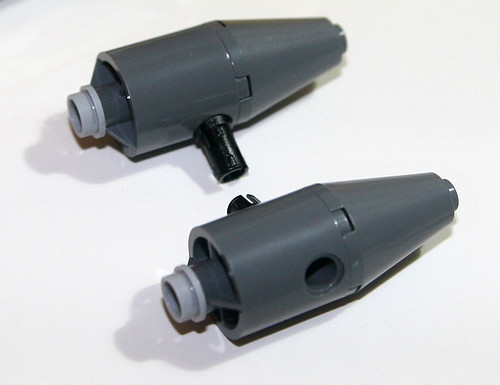 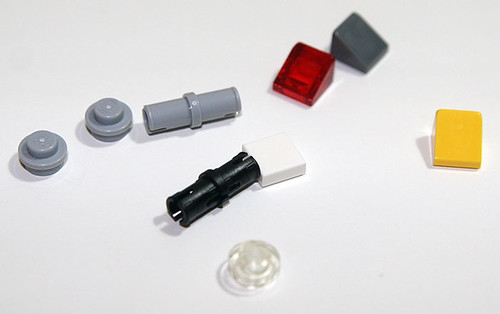 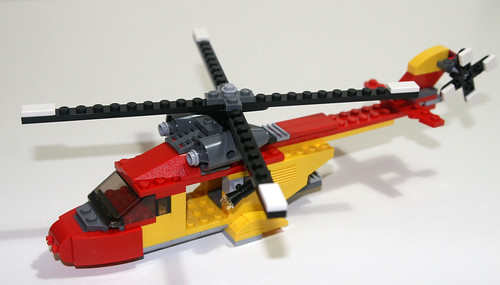 Thoughts – Pricing, Design, and Build:
Definitely worth the price – all of the pieces are easily usable for MOCs, and you are basically getting three models in one due to the extra instructions. The design for the helicopter is well thought out – when the movable ramp in the back is lowered (yes there’s a ramp on the back, see the above photos), you can easily see all the way through the model from the front to the back. There are no wheels included – I guess this is supposed to represent landing on water. It does a good job of showing the proper way to make LEGO connections in regards to load bearing areas, in particular with plates. Once you finish it, it feels very solid. One problem with the helicopter is that the wheel well covers have a tendency to come off. I don’t know that there is much that can be done about that.

Thoughts – Parts:
If you’re into making MOCs and need lots of red and yellow pieces, this set is for you. As a whole, all of the pieces are easily usable in other MOCs – only a few what I would call “specialty” parts (the engines) and even then most of us always have a need for something like that. It’s got 6 light gray 4558953 parts, the 1×1 brick modified with stud on one side that generated a lot of buzz earlier this month, that’s similar to the headlight brick. There is a large number of plates along with plenty of other useful pieces.
Thoughts – Swoosh factor, playbility and integration with other sets:
Great “swoosh factor” – it’s a helicopter that can be remade into a biplane and then into a speedboat. It’s not really made to integrate with other sets the way most lines are, but it would be a cool addition to the City sets. One problem is it’s not to minifig scale, but it would be a cool little background/diorama piece. I think a kid would get a lot of use out of it.

Conclusion:
It’s a great set that may end up being priced down to $9.99 when all is said and done. Even at $12.99, it’s a good purchase. I don’t necessarily agree with the 6-12 years old for the ages, due to quite a few small 1×1 parts that could easily be lost. For somebody of a reasonable age that is new to LEGO, as I said in the preview, it would be a great set for teaching them the proper way to make connections between the various LEGO elements .