Over at Eurobricks, there is a thread discussing the 2010 Star Wars sets from LEGO, and somebody posted a couple of images they found on Amazon Japan. Unfortunately they aren’t very high resolution. 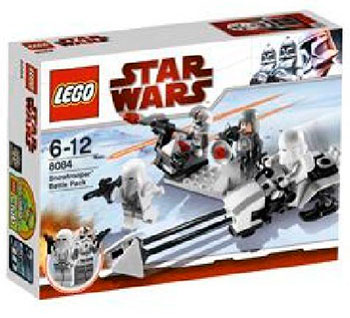 $14.99 at Amazon.com (US) with the description only and no images:
* Includes 2 snowtroopers, 1 Imperial officer and 1 AT-AT driver with new helmet minifigures
* Battle station features rotating flick missile firing gun and seat for gunner
* Relive the Battle of Hoth by adding #8083 Rebel Trooper Battle Pack
* Opening scene of Empire Strikes Back from Episode V movie
* 74 pieces 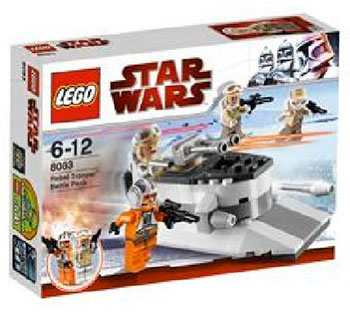 $14.99 at Amazon.com (US) with the description only and no images:
* Includes 1 Zev Senesca and 3 Rebel troopers with new Hoth helmet minifigures
* Ice cutter includes 2 flick fire missiles, rotating gun and cargo box
* Create your own Hoth battle by adding #8084 Snowtrooper Battle Pack
* Opening scene of Empire Strikes Back from Episode V movie
* 79 pieces

In theory, those should be around $10 – $12 on launch in the retail stores as well as on Amazon.com, based on other sets, including the 8015 Assassin Droids Battle Pack as well the 8014 Clone Walker Battle Pack which are similar in size, number of pieces, and minifigs.